The Book Eaters is a stunning dark urban fantasy about familial love, patriarchy, and motherhood.

Sunyi Dean is an autistic author of fantasy fiction and the author of the innovative novel The Book Eaters. Hidden across England and Scotland live six old Book Eater families. The last of their familial lines  exist on the fringes of human society and subsist on a diet of books. The novel follows Devon Fairweather, a Book Eater princess, who is thrown into a state of turmoil after her second child Cai is born a mind eater — a strain of her own kind who subsists not on books but the minds of humans. Growing weary of finding prey for her son, Devon seeks a miracle drug called Redemption, which promises to alter Cai’s growing appetite.

Despite being a fantasy novel, The Book Eaters touches on a multitude of important issues, such as patriarchy and the status of women and girls. At times, the novel feels very The Handmaid’s Tale-esque. Devon is a member of a controlling patriarchal family who limits her to a strict diet of fairy tales (the only stories they deem appropriate for a girl to consume). Their daughters, who are rare, are treated as commodities and married off numerous times to have children, which are then taken away from them. In this sense, Dean urges us to question who the real monsters are in a society of monsters. This atmosphere of control is heightened by Dean’s flipping of the narrative between past and present, her slow reveal of Devon’s history and the taking away of her firstborn child. In this way, Dean successfully explains Devon’s thought processes and actions and her determination to gain freedom for herself and Cai.

Furthermore, the way in which Dean plays around with the notion of eating physical books and the nightmarish reality of how that could alter us is highly interesting. At the centre of Dean’s novel is an attestation to the role of stories in society and how the types of stories we are exposed to can shape and limit how we view the world. We see this with Devon’s relationship with Hester and the way it spurs her to analyse her own sexuality. In this way, Devon’s character illustrates the impact of new experiences on broadening our views of both society and ourselves.

The Book Eaters is an imaginative, poignant story that touches on issues that extend far beyond the fantasy genre.

The Book Eaters will be available to purchase from August 18. 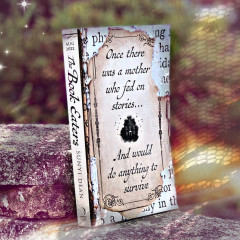 The Book Eaters by Sunyi Dean

The Book Eaters is a stunning dark urban fantasy about familial love, patriarchy, and motherhood.