Thor: Love and Thunder is the latest addition to the MCU, which now has around 30 feature films to its name (at this point, who’s keeping count?) along with several TV shows. This newest instalment features Thor, the God of Thunder (Chris Hemsworth) facing off against Gorr the God Butcher (Christian Bale), and this time Thor’s first love Jane Foster (Natalie Portman) has returned, inexplicably wielding Mjolnir.

First off, the positives. Christian Bale gives a fittingly creepy performance as Gorr, and his character design is rather well-done. While he doesn’t have an awful lot to work with, and his screen time is rather minimal, he ends up being one of the more memorable Marvel villains, and his arc is one that feels earned and complete.

Unfortunately, the list of positives has already been somewhat exhausted.

Bale as Gorr is a performance that deserves a far better film, because the one we got is jam-packed with so many jokes that the entire thing feels completely farcical. Taika Waititi faced mild criticism from some fans following Thor: Ragnarok because of how many jokes it was filled with. Some thought it made the serious moments feel less affecting, and any drama in it was diminished because it was, first and foremost, a silly comedy. Those fans will be feeling rather vindicated now. Love and Thunder is filled with so many jokes — at least two per minute — even during moments that are supposed to be serious or sad, that the entire thing is bizarre more than anything. When you find yourself laughing at the film not because the jokes are funny, but because you find the whole thing ridiculous, there’s a problem. Especially when the film is, at its core, supposed to be about the protagonist learning how to cope with loss and that it’s better to have loved and lost than to have never loved at all.

There’s a scene in Thor: Ragnarok where there is a stage play on Asgard, featuring Matt Damon as Loki. It’s very silly and played for laughs, because the play is intentionally bad. Thor: Love and Thunder is almost like someone decided to make a feature film version of that play. The sheer amount of jokes reduces the whole thing to farce.

The VFX are also frequently questionable. There’s one scene featuring a floating head that especially stands out because it looks like it belongs in a super low budget indie film, not a blockbuster/franchise film funded by one of the most powerful corporations on the planet. There are several times where the CGI and visual effects are quite frankly terrible, though. To be clear, this isn’t a slight on the VFX team at all — it’s a criticism of Marvel/Disney and their practices. They pay VFX artists way below what they should while simultaneously overworking them. More and more stories have been coming out lately of VFX artists who have had Marvel as a client, and none of them are good. Overworked and underpaid is an understatement.

Vanity Fair released a video recently of Taika Waititi and Tessa Thompson (who plays Valkyrie) watching a clip from Love and Thunder and talking about it. For the most part, all they talk about is how certain things in the clip don’t look real or look weird, and how the performances seem questionable because things were changed in the editing room. There are clips of Chris Hemsworth and Taika Waititi being surprised when they found out the film ends with “THOR WILL RETURN” and other videos of Taika Waititi just generally not knowing very much about his own film. Taika Waititi is not incompetent — Thor: Ragnarok received some criticism, but is one of the most well-liked Marvel entries, and his work outside of the MCU is for the most part very good. How can a good director know so little about their own film?

The directors can only take some of the blame when it comes to Marvel movies, because all Marvel cares about is pumping out content. They’re not films or television shows. There is no regard for quality or artistic merit. The Marvel Cinematic Universe is content. Cameos, crossovers, heaps of A-list celebrities; anything to get people talking about it, and anything to get people in those cinema seats for the next entry. Disney is a factory churning out a product. Every employee knows a limited amount of what they’re making. The actors show up and say their lines (Christian Bale didn’t even know what Marvel films were according to a recent interview), often not knowing what the story is. Directors don’t know how things will be edited or put together, and VFX artists are forced to work on several different versions of the same thing so that the higher-ups can change their mind last minute if they need to. There’s no passion involved. They merely pump out content.

It hasn’t always been to this extent, though. Marvel has never exactly been the height of artistic achievement, but they haven’t always been so subpar in every department, either. There has been a noticeable fall in quality since Avengers: Endgame, even to casual fans. Part of the reason for that may be that the Marvel factory is now churning out more products than it can handle. The first two phases of the MCU both had six films each. Phase three had eleven films and ended the Infinity Saga. Phase four, so far, consists of six films and seven TV shows, meaning that phase four alone contains as many hours of content as the first three phases combined. No wonder there has been a drop in quality, and no wonder people are starting to feel superhero fatigue, eh?

It’s tough to review Thor: Love and Thunder as a film, because it barely is one. It’s a product. If you’re looking for a film, though, you’ll find one that is entirely forgettable, filled with questionable performances (largely because nobody quite knows what they’re supposed to be doing or how it will all come together), shoddy VFX, and so many jokes (most of which don’t land) that even the biggest Taika Waititi fans will grow tired of his specific brand of humour before the two-hour runtime is up. 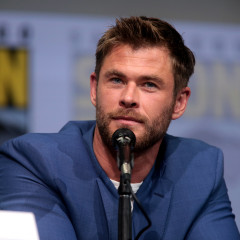