Tuesday 21 June saw The Avalanches take to the stage in a packed-out O2 Ritz in Manchester, where they performed tracks from across their whole discography; from their debut album Since I Left You, the acclaimed follow-up Wildflower, and their latest release, 2020’s We Will Always Love You. It was a brilliant set, with The Avalanches providing endless energy and fantastic vibes as they played some of their best tracks.

It’s hard not to feel a tinge of disappointment that one or two of their best songs – such as Frontier Psychiatrist – were omitted from the setlist, but that is beyond overshadowed by what was a fantastic night of great music, positive vibes, and a lively crowd. The Ritz slowly filled up over the course of the night, and by the time the encore came around and The Avalanches played their biggest hits – namely Since I Left You and Because I’m Me – the entire venue was utterly electric, filled to the brim with singing, dancing, and smiles. You couldn’t have asked for a better atmosphere. There are few things that compare to the euphoria of great live music, especially when the songs are as effervescent as The Avalanches tracks often are.

For those who aren’t aware of The Avalanches, their music can be described as a unique mix of dance, electronic, hip hop, sampledelia, and one or two other genres – but realistically, if you want to know what they’re about, you’ll have to listen to their music to get the best idea (and you’re unlikely to regret doing so). The group has had several members since their origins in the 90s, but it currently consists of Robbie Chater and Tony Di Blasi, both of whom work on the production and with various instruments. They're one of the most unique bands you’re likely to hear, and as they proved on Tuesday, they are just as brilliant live as they are pre-recorded. If you haven’t already, you should waste no time in discovering their excellent discography, and, whenever you can, catch them at a live show. 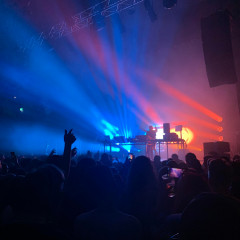