Welcome to Six, the fierce, feminine, and fun musical about the six wives of Henry VIII. These women have been gossiped about constantly over the past 500 years, and it is finally time they get a say on their story. They have had 500 years of hardships and history, but it is finally time for their fairy tale ending.

Six is a modern ‘historemix’ of the lives of Henry VIII’s six wives: Catherine of Aragon, Anne Boleyn, Jane Seymour, Anna of Cleves, Katherine Howard, and Catherine Parr. They have come together as a band to stage a pop concert and invite the audience to hear their stories. They cannot decide who should be the lead singer, so they decide on a competition, or singing battle, to see who suffered the most as Queen. Each wife believes they had it the hardest and they belittle each other’s attempts to prove their hardship. However, they become frustrated that their place in history is defined by one man. And as they sing: Together, they decide to pick up the pen and the microphone and re-write their own stories.

If you haven’t seen the show, then rush to book it. You won’t quite see anything like it. It will be a delight as it rewrites your history books with glitter and confetti. If I could give each queen a star, this review would break records because this show would get a six-star review! These women are more than a rhyme, a song, or a wife. They were more than a King could handle. 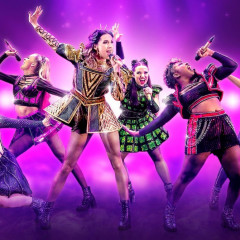