The Black Phone is set in the late 70s, which is an obvious choice for a film like The Black Phone because it was an era when serial killers peaked and violence against and among children was more easily ignored by adults, and that’s basically all this film consists of.

Adapted from a short story written by Joe Hill (Stephen King’s son), The Black Phone is about a serial killer wreaking havoc on a town in America by kidnapping several children. Thirteen-year-old Finney (Mason Thames) is the brother to Gwen (Madeline McGraw), who he has a lovely relationship with, even despite living with their abusive father (Jeremy Davies), who regularly beats them. Ethan Hawke plays “The Grabber,” and after a somewhat meandering opening in which we get to know some of the characters, Finney eventually becomes his next victim. The difference, this time, is that both Finney and his younger sister seem to possess some sort of supernatural powers. Finney is able to speak with past victims of The Grabber via the titular black phone, which is the only thing in the basement where Finney is kept besides a mattress, and Gwen has dreams that have details about the cases none of the public are privy to.

The concept is a decent one — a little bog-standard for a horror film and very Stephen King-esque (Joe Hill certainly is his father’s son), but it’s not in  the concept that The Black Phone falls short. It falls short because of… well, everything else. The acting is subpar from just about every character, frequently bordering on unintentionally comedic, the plot is bland and telegraphed, and the horror elements can barely even be called horror. How do you make a horror film about a serial killer abducting children, cast a big name as the serial killer, and have him do next to nothing? Of all the gore and violence in The Black Phone, the vast majority comes from two school kids fighting and the protagonist's father being abusive. Hawke’s performance as The Grabber is sometimes questionable (he has certain mannerisms in some scenes that disappear in the next, and he never feels like a character so much as a generic creep) but it doesn’t help that he’s never given much to do. Even the jump scares (which are an inherently cheap device anyway) are mostly of the ghosts of the dead kids. The Grabber amounts to absolutely nothing in the end.

A lot of the problems come down to the writing. The Grabber amounts to nothing but a cliché obstacle to overcome, but nothing else really goes anywhere either. The siblings’ abusive father inflicts more violence upon children than we ever see the serial killer antagonist do, which is plain bizarre, and the father never has any use. He might as well not be there. He doesn’t have a redemption arc or… any character development whatsoever, really. He’s just a pitiful alcoholic abusive dad who sort of disappears towards the end of the film. There are flashback scenes involving one of the children who were killed by The Grabber in which this child of an unknown age fights two other children after they ruin his game of pinball, and again, there is more violence in this scene than in any that we see the serial killer/child murderer in. Go figure.

Perhaps the dumbest character in the film (in terms of being both poorly-written and plain stupid in the film itself) is the cocaine-addicted brother of The Grabber. He literally lives with the serial killer antagonist, spends all his time on-screen attempting to solve the case of the missing children, yet somehow never ventures into the basement where Finney is being held and never suspects his brother of anything. That’s easy to ignore though, really, because The Grabber and his brother — despite literally living together and both being somewhat significant characters — literally never have a scene together. Who knows what their dynamic was like. Hey, it doesn’t matter at all if we don’t show it, right?

In the end, The Black Phone is twice as bland and half as horrifying as its ugly colour palette. The writing is nonsensical half the time, and the other half it is so telegraphed and predictable and boring that it can hardly be classed as a horror film, and it certainly can’t be considered a good one. 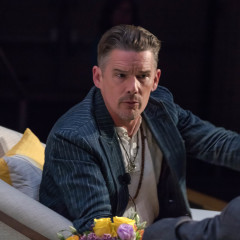