All That’s Left in the World is a heartwarming and captivating debut set in post-apocalyptic America.

All That’s Left in the World is a queer, YA post-apocalyptic story following two boys, Jamie and Andrew. Both boys are alone in a world that has been mostly wiped out by a deadly virus that they call ‘the bug’. After being wounded in the woods by a bear trap, Andrew stumbles upon Jamie and his cabin. In this new and dangerous world, Jamie is at first apprehensive of Andrew, but something about him instils trust in Jamie. After helping to heal Andrew’s wounds, the two boys experience a dangerous encounter with a nearby group of survivors, spurring them to head on a perilous journey south. But both boys have their own troubled pasts, and they will need each other to battle their demons.

Brown’s fantastic character development and use of dual narrative make his debut truly unputdownable. Both Andrew’s and Jamie’s characters feel authentic and believable, and their experiences of pain, fear, and love feel deeply real. Moreover, it was incredibly rewarding to watch Jamie develop from a fearful boy into someone willing to leave behind his home and his only sense of safety to protect the person he loves. In addition, you are immediately drawn to Andrew’s character with his wit and sarcasm. Although the subject matter of the novel is dark, Andrew’s humour makes for a highly enjoyable, fun read.

Furthermore, Brown does a great job manipulating the dystopian genre to touch on relevant topics, from homophobia to racism and white supremacy. Even in a post-apocalyptic world, homophobia and racism persist, as Andrew and Jamie discover when they encounter an all-white settlement of survivors. Admirably, Brown turns this hatred on its head — it is Andrew and Jamie’s love for each other that helps them survive this treacherous world.

When the world ends, all that’s left is love. 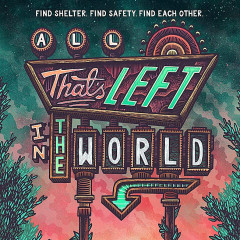 All That’s Left in the World by Erik J. Brown

All That’s Left in the World is a heartwarming and captivating debut set in post-apocalyptic America.