The Colour is Mine exhibition at the William Morris gallery pays homage to the work of Althea McNish, but there is more to acknowledge about the designer than her fashionable prints.

I visited the Althea McNish exhibition and was unsure of what to expect from it but was pleasantly surprised by the vibrancy and colour in McNish’s effortless designs and how they came to represent what the artist herself added to progressivism. Here are a couple of things from the exhibition that grabbed my attention:

McNish - A member of the Windrush generation:

It is not so often I thought, whilst looking at a picture that depicted McNish as determined and hardworking, that Britons have their attention turned to the creative work of an ethnic minority. No more was this proved as when I turned to look at several of McNish's prints draped along the walls and simultaneously heard murmurs, hinting at what sounded like surprise, of her Trinidadian roots. That troubled me because I wondered why one is unable to comprehend that Windrush migrants (those who came to the UK from the West Indies and South Asia between 1948 and 1970) harbour talent. Why are they forgotten?

Now more than ever, many have become more vocal about the history curriculum as being partially to blame. The curriculum failed to cover the topic of this generation that included people like my grandparents until I was a second-year A-Level student.

But I could spot a positive turning point with the exhibition. This was not just about art but a milestone in how we would be taught to read history. Every story that ever depicted the non-Englishwoman, the ‘other’, without talent would be challenged even slightly because of this.

Since the exhibition has been so ‘well- received,’ attracting more than 528 young people in twelve school groups who have taken self-guided tours in recent months, there is still hope that future generations will understand how vast the talent-pool is. It is important that all young people visit such exhibits to be made aware of their nation’s historical art and that the future of art can too be indelibly marked with their contributions.

Although it is more common to see contemporary artists that are women rather than from the Windrush generation, McNish’s stellar contributions to her field of design and art once again prove that women are breaking boundaries. Her ‘Bachelor Girls Room’ (which reimagines the model room she created in 1966 for the Ideal Home Exhibition) is for metropolitan females in their twenties, conveying a rather great degree of self-possession and confidence.

The furniture to print, multilayering, and colourful designs were entirely new to the British consumer in the 1960s, and as such, depict a woman breaking away from homogeneity. Indeed, these designs encourage and inspire a break from traditional norms and expectations for women because of the confidence behind their creation.

In her own words, McNish argues that ‘women should always have the opportunity of showing off themselves, their talents and their achievements…’ all of which the Bachelor Girls Room showcases. It is for women to wonder what they can do to represent themselves and how they can support the salience of self-expression. What does it mean to create our own clothes and furniture that represent who we are, McNish asks many of us to consider. Should we always play the hand we are dealt or create our own identities? Perhaps this can be partially achieved through individual stylistic choices. 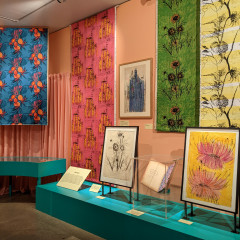 Why the Althea McNish exhibition is a must-see for all

The Colour is Mine exhibition at the William Morris gallery pays homage to the work of Althea McNish, but there is more to acknowledge about the designer than her fashionable prints.