What better way to celebrate the Diamond Jubilee than in the most British fashion possible, sat back with a couple of pints, listening to some classic British music, all whilst at a UK summer festival.

That’s what I had the pleasure of doing this weekend at the family-friendly festival LeeStock.

The festival saw some of Britain’s iconic artists perform, including headline performances from Scouting For Girls, Ash as well as the likes of Stereo MCs and Toploader there as well, a classic selection of some iconic UK tunes. The festival also held an incredible line-up of new up-and-coming artists, showcasing the future of UK music.

A highlight to be sure had to be from Liverpudlian Kris James, an incredible new singer/songwriter, with a host of spelling pop tunes. Despite releasing music only recently, Kris has been in the music game for years and his vocal performance really showed that. Only last year did James release his self-titled debut album, yet what an incredible performance he put up for us.

Giving us a wide selection of some of his work, a few tracks off of his debut album including ‘Eyes Open’ and ‘Naive’, and a brand new single that is yet to be released until later this year ‘The Way You Move’. James also expertly picked a couple of crowd-pleasing covers that seamlessly flowed with his set, Harry Style’s ‘Golden’ and Cher’s ‘Believe’. 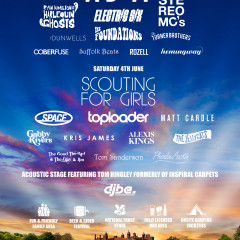 What better way to celebrate the Diamond Jubilee than in the most British fashion possible, sat back with a couple of pints, listening to some classic British music, all whilst at a UK summer festival.