Peach Blossom Spring is a beautiful work of historical fiction about war, family, resilience, and migration.

Peach Blossom Spring is a stunning debut by Melissa Fu, inspired by her father’s real-life experiences during a tumultuous period in Chinese history. The novel follows three generations of a Chinese family from 1938 to the 2000s, beginning with a young mother named Meilin and her four-year-old son Renshu. When the Japanese invade their village, Meilin and Renshu are forced to flee their home and family. From here, they embark on an epic journey across China. The narrative then fast forwards, transitioning to the perspective of Renshu, who is coming to find his place in America with his wife and daughter. But Renshu is haunted by his traumatic childhood, and when his daughter wishes to learn more about her heritage, he refuses to talk, instead choosing to shield her from all that he experienced as a young boy in war-torn China.

Fu’s debut has many merits. Her characters feel real, with complex personalities, making for a compelling and compulsive read. Meilin’s character, for example, is particularly easy to fall in love with. Throughout the novel, her heroism is astounding, and it is beautiful to see how her character illuminates the spirit of human survival and the strength of motherhood. Additionally, Fu’s language is gorgeous, and the first half of the storyline is gripping, with mesmerising Chinese fables elegantly weaved into the story. Throughout their journey across China, Meilin tells her son fables to comfort and console him. However, these fables serve a deeper purpose as they relay the main theme of the book: resilience.

The novel’s only downfall is that once the story moves over to US shores and we transition to Renshu’s perspective, the pace begins to slow, and the storyline becomes somewhat confusing as Fu delves into Chinese politics. Nonetheless, this section of the story is an important reminder of the casual racism present in the US, as we witness the hoops Renshu is forced to jump through to assimilate himself into American society. Upon arriving in America, for example, the first thing Renshu is told is that he must change his name to Henry to make his name easier for his fellow Americans to pronounce.

Overall, Peach Blossom Spring is a superb debut that takes a moving and fresh look at the history of modern China and the immigrant experience. 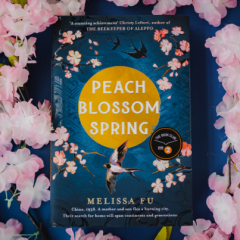 Peach Blossom Spring is a beautiful work of historical fiction about war, family, resilience, and migration.