In this sequel to the classic 1986 film, Tom Cruise and director Joseph Kosinski transcend simple military propaganda and create a visually-spectacular testament to the power of the moving image and human ingenuity.

Set three decades after the events of the first film, Tom Cruise reprises his role as Captain Maverick, as he is tasked with selecting and training a team of young elite fighter pilots for a secret bombing mission to destroy an unsanctioned uranium enrichment plant buried deep in a valley chasm.

In the midst of the Ukraine War, the humiliating fallout of British and American withdrawal from Afghanistan and the ripples still felt from Covid-19, it would be easy to denigrate Top Gun: Maverick as, at best, a cynical ploy to cash in on 80s nostalgia, and at worst, a jingoistic call-to-arms. But this would do a great disservice to the sincere and heartfelt passion for cinema and humanity on display here. Its eye is so often focused on the sheer thrill of flying; of seeing humans and machines alike being pushed to the limits of their physical existence, that any concerns about who is fighting who and whether we ought to approve or disapprove of their intentions never cross your mind.

If Top Gun: Maverick could be considered a recruitment advert for any industry, it is for Hollywood - not the navy or air-force. Cruise brings his trademark commitment to authenticity, providing a comprehensive training program for him and his co-stars to prepare them for the stresses of piloting a fighter jet. Sequences which would typically be recreated on a green screen, Cruise and Kosinski replicate as closely as they can with practical effects and real-world flying maneuvers. Similar attention to detail is displayed in the camerawork of DP Claudio Miranda - contrail beams, cloudbursts and the spiralling kick-up of dust are rendered with a painterly vision worthy of the great artists of movement in the early 20th century.

What is even more surprising is that - outside of its admittedly very formulaic script - it sets aside time to capture moments of genuine human warmth and frailty. Who would have thought that one of the most memorable sequences from a Top Gun sequel would not be one of its numerous dogfights or its opening sequence where Maverick pushes his plane to hypersonic speeds, but a quiet reunion between two old-friends, struggling with their past and their mortality? Moments like these remind us that Cruise's superstar reputation distracts from his uniquely brilliant capacity for conveying complex human emotion, without being saccharine or falling into melodrama.

What Maverick does lack over its predecessor however is a distinct and effective musical score. For good or for bad, the original Top Gun's synth and overdriven guitar-led soundtrack became arguably the definitive cultural signifier for the entire 1980s and helped to elevate the film to iconic status. Maverickcompletely lacks the pop-music sensibility that the late director, Tony Scott, brought to the original Top Gun, instead being scored by another Hans Zimmer orchestra, whose sound has saturated mainstream filmmaking for decades. Despite Lady Gaga's talent as a pop songwriter, even her attempt to provide a new anthem for Maverick is forgettable. Its only memorable or emotionally stirring musical moments come from the homages to - or uses of - the original film's soundtrack. No one in five years, let alone thirty years, will remember these pieces of music and they certainly will not be hearing them as part of retro playlists in clubs or bars like Top Gun's Danger Zone. It is a shame that the startling and powerful images onscreen do not have an equally powerful score for them to be paired with, instead settling for a score that is entirely functional, but completely lacks character.

Nevertheless, it is remarkable that a film with this level of marketing, budgeting, star-power and scale can so easily straddle the line between art and entertainment. Maverick is as much a piece of kinetic art as it is a crowd-pleasing blockbuster and should be applauded for it. 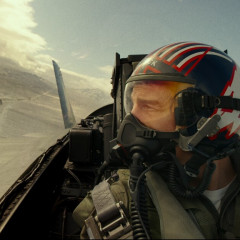 In this sequel to the classic 1986 film, Tom Cruise and director Joseph Kosinski transcend simple military propaganda and create a visually-spectacular testament to the power of the moving image and human ingenuity.