Voice MagReviewsWhat My Bones Know b…

What My Bones Know is a shrewdly insightful memoir that sheds light on the little-discussed topic of C-PTSD (complex post-traumatic stress disorder).

By age thirty, Stephanie Foo’s life appeared perfect on paper. She had landed her dream job as an award-winning radio producer at This American Life and had found love. But behind her office door, she suffered from debilitating panic attacks and depressive episodes. In her searing memoir, Foo delves into her diagnosis with C-PTSD — a complex version of post-traumatic stress disorder that occurs when one suffers trauma continuously over a long period of time. Throughout her memoir, Foo takes us along with her on her path of recovery as she seeks help through medical and psychiatric therapies. All the while, Foo bravely paints us an intimate portrait of her childhood and the abuse she suffered at the hands of her parents, who both abandoned her as a teenager.

What My Bones Know is an extremely interesting and unique memoir. In particular, Foo’s exploration of how mental illness is connected to physical illness was most enlightening. Foo explains how, according to scientific research, children who suffer from child abuse have lower life expectancies. This is because the repeated trauma these children endure transforms the cells in their bodies, making them more susceptible to life-threatening illnesses. Additionally, Foo explores how trauma can be passed down from generation to generation. Tracing back her family history, Foo learns of the trauma her predecessors suffered during Japan’s occupation of Malaysia. As a result of the cellular changes that occur when one suffers trauma, trauma can be passed down through genetics, affecting future generations.

Most crucially, though, What My Bones Know illuminates the struggle in not only finding effective healing methods for mental illnesses, but in convincing others that mental illnesses are valid in the first place. As Foo’s experience shows us, those who have mental illnesses often have their pain outright denied or minimised — especially those who have under-researched illnesses such as C-PTSD. In this way, Foo ensures they feel seen and provides hope for those willing to heal.

In summary, What My Bones Know is a beautifully written memoir about healing from complex trauma that will undoubtedly change the lives of many. 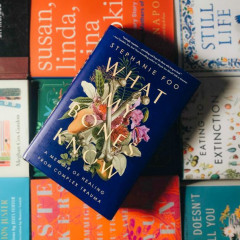 What My Bones Know by Stephanie Foo

What My Bones Know is a shrewdly insightful memoir that sheds light on the little-discussed topic of C-PTSD (complex post-traumatic stress disorder).