Voice MagReviewsReview: On the Count…

On the Count of Three is a black comedy film directed by and starring Jerrod Carmichael concerning two friends who make a pact to kill themselves together before the end of the day. It’s not as bleak as it sounds, though. Despite the heavy subject matter, there are some hilarious moments in the short 86-minute runtime, and the chemistry between Val (Carmichael) and Kevin (Christopher Abbott) is a joy to watch.

With it being their last day on the planet, Val and Kevin decide to make the most of it. They’re deadly serious about their suicide pact: the film starts with Val’s suicide attempt being thwarted by an entirely unaware coworker, and Kevin is in a psychiatric hospital due to his latest in a long line of attempts. Val helps him escape, which is when they decide to kill themselves together, holding a gun to each other’s head and agreeing to shoot on the count of three. At the last minute, they decide they’re not quite ready, and off they go to enjoy their final few hours.

Over the course of the film, we slowly learn more about their past together and their friendship, along with details about some of the people that influenced their lives. Kevin suggests that Val make up with his dad, for example, while he wants to pay a visit to his childhood psychiatrist for reasons that eventually become clear. It’s a great concept for a buddy film, and thankfully the themes are dealt with sensitively. It would have been easy to get carried away by the concept of two friends knowing it was their last day alive and having them live it accordingly, but the topics of suicide and depression are handled adeptly, and despite all the humour it is an affecting story of two people struggling to find meaning in their lives.

That may be the most admirable thing about On the Count of Three: the fact that it manages to be hilarious while also handling a sensitive issue like suicide so well is a testament to the writing and direction, and it’s very impressive that it never feels tonally conflicting. Humour and pathos are evoked in equal amounts, and it makes for a rollercoaster of emotions that’s well worth your time.

The biggest flaw here is that the events of their alleged final day are a tad predictable. Aside from one or two surprises, it’s pretty clear for the most part where it’s going, and that is slightly disappointing for a “final day on earth.” It would have been nice to see a little more creativity in what conspires, although considering the characters are suicidal, it might have been a little tough to have them suddenly find the motivation for a grand adventure, and to have increasingly wild events happen by pure coincidence may have become a little far-fetched. It’s a tough balancing act, and while On the Count of Three didn’t get it completely perfect, it delivered a film with some hilarious dialogue, likeable characters, and some truly touching moments.

In the end, it all makes for a film that is genuinely worth watching. It’s original, it’s fun, the performances are excellent, and aside from all that, it’s nice to see men talking openly about mental health and it’s nice to see a film that handles that subject so well. A refreshing black comedy, and Jerrod Carmichael may be a director to look out for. 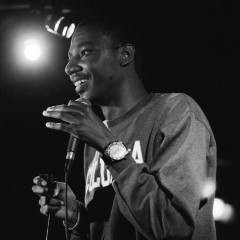