Here is the review of Matthew Bourne's Nutcracker review that I saw at the Birmingham Hippodrome.

I have heard about Matthew Bourne’s productions for a very long time and I have wanted to see one for years. I knew he mixed classical ballet styles with sharper angular movement, folk dance steps and mime as well as other elements from other dance styles but I couldn’t really imagine what the choreography would be like. This means that he can bring a comedic element to the ballet which lightens the mood.

The Nutcracker is typically viewed as a Christmas ballet due to its festive theme but in Bourne’s version all the Christmas elements are taken out making it a more adaptable show that can be enjoyed all year round. He changed Clara from being a slightly spoilt rich girl to being a girl who is in an a monochrome orphanage under the eye of a strict matron, delighted when she receives gifts from some kind donors. This allows him to make a real contrast between the act one in the orphanage and the whimsical dream land in act two.

During Act one the scene is in the orphanage. The children’s choreography is more juvenile with flexed feet and their arms not being at the perfect angles whilst the stricter characters have very precise movements. The costuming of the matron furthers this as she had a very angular suit dress on that is completely monochromatic. Whilst the matron is not there the children are playing around with every person doing something different. This chaos means there is always something to look at and it shows how the children just want to be children. However, when the matron enters with the matron the mood changes immediately and they are all really proper as they try to impress the governors and not get in trouble. My favourite moment in this act is the shout from Dr Dross as he tries to regain control of the chaos from the children. This is not typical of a ballet and it is a surprise to the audience. I love the reactions that all the dancers give like they are genuinely surprised and that they didn’t expect that to come out from Dr Dross. The toys given to them by the governors are then taken away from them and put in a crooked wardrobe at the back centre of the stage. The children decide to revolt against the strictness of the Matron and Clara’s nutcracker doll turns into a real man. The set then cracks open to reveal a lollipop tree which all of the children escape down. The set screen then drops to reveal a first look at the ethereal dream land. The children in the orphanage then become the sweets that Clara encounters on her journey. This helps with the continuity of the story line. For example, there originally is a nerdy couple that become cupids and help Clare to win her man back and they also act as comedic relief as they are a bit clumsy.

The stage set for the Frozen Lake goes much further back to show the escape from the orphanage and it has an ethereal theme to it. It reminds me of the Beauty school dropout scene in Grease as it is mainly all white with a heavenly overtone. The movements are also a lot smoother to contrast the chaos of the last scene of act one. In this scene Princess Sugar is trying to steal the Nutcracker away from Clara and it works. The Nutcracker and Clara blend in a lot more as all the dancers are wearing all white costumes. This reminded me a bit of a blizzard scene as the nutcracker is whisked away from Clara. The princess steals him away leaving Clara behind alone. There is still a childish element as Bourne incorporates a snowball fight with fake snow balls to display the link between the two sets.

In the first scene of Act two, there is an onstage costume change where Clara goes from her white nightgown to a beautiful blue dress with white spots on. The two cupids help her navigate her way to Sweetieland until she reaches the gates, which is represented by a big mouth. The set is designed by Anthony Ward and he uses warped perspectives and vivid colours to show the craziness of Sweetieland. The original Nutcracker has some potentially racists elements in it such as the Arabian dance. So instead Bourne swaps it out for the entrance of King Sherbet, Queen Candy, the Allsorts Trio, the Knickerbocker Glory, the Marshmallow girls and the Gobstoppers. Each entrance has a different theme such as a Latin tango dance for the Allsorts trio or the rhumba for the Knickerbocker Glory. My favourite out of this group was definitely the Gobstoppers as they provided a comical release through pretending to be driving motorcycles. This physical comedy paired with the Humbug bouncer lifts the mood of the scene to distract the audience from the fact Clara can’t get to the Nutcracker.

The next set is a massive showstopper cake that the dancers climb on. Here, all the characters are seen again and it shows the fight between Clara and Princess Sugar for the Nutcracker. The cake had candles and other lights on that slowly went out as Clara began to win. She finally gets the nutcracker back but then they return back to reality. All of the children are back in their dormitory. This suggests that the whole story was just a figment of Clara’s imagination or a dream she had to escape the confides and strictness of the orphanage.

Overall I really enhjoyed the way Matthew Bourne brought different styles of dance into one coherent form that flowed really well. Most of the dancers are relatively young in their careers but I think that they have so much potential and will do well in the future. I would recommend this show to anyone ifthey have the opportunity to see it. 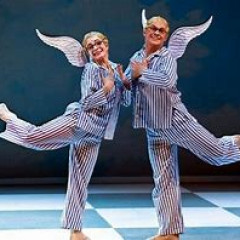 Here is the review of Matthew Bourne's Nutcracker review that I saw at the Birmingham Hippodrome.