Nick Cage’s latest feature sees him playing himself in a hilarious satire of his own career and Hollywood in general.

The Unbearable Weight of Massive Talent is Nick Cage’s newest film, and it is more Nick Cage than any Nick Cage film has ever been. If you’ve seen enough Nick Cage films, you’ll probably understand what that means. In fact, the more of his films you’ve seen, the better, because this wonderfully silly, incredibly meta action comedy features a slew of references to Cage’s past work.

It sees Nicolas Cage playing a fictionalised version of himself, struggling with his acting career and being unable to land the right roles. He also has a strained relationship with his ex-wife (Sharon Horgan) and his daughter (Lily Mo Sheen), who is now blossoming into an adult (and, much to Cage’s shame, doesn’t seem to share his taste in films). Eventually, he winds up in the company of Javi Gutierrez (Pedro Pascal) and becomes caught in a bizarre scenario where the CIA want him to help them take down a major international drug smuggler and criminal.

Cage, who has been somewhat of a meme on the internet for the past decade, satirises both himself and Hollywood in a really fun way. It sometimes seems as though his status as a meme has led to some people forgetting how good of an actor he really is – a lot of jokes are made about some of his more eccentric roles and “Cage rage” memes have always sort of disparaged his very real talent as one of the best actors of his generation. Ethan Hawke said that Cage was “the only actor since Marlon Brando that’s actually done anything new with the art of acting” while Guillermo del Toro called him the “Paganini of expressionist actors” and an “unrepeatable genius.” His performance in last year’s brilliant film Pig is also a wonderful reminder of his ability to give a subdued yet brilliant performance too. It’s all the more hilarious, then, that he was happy to play himself in such a self-deprecating role that leans into all the memes that have been made about him over the years and satirises his career.

Pedro Pascal is as charming as ever as Javi, too, and the best thing about this film is the wonderful chemistry between Cage and Pascal. Much to Cage’s welcome surprise, he and Javi end up having an awful lot in common, bonding over such things as their favourite films (including The Cabinet of Dr. Caligari and Paddington 2). There’s a great buddy comedy dynamic going on and it makes the whole thing a lot of fun. While the jokes don’t necessarily always land, there is rarely a moment where you’re not smiling at the very least. The antics the duo get up to is always very silly, but there is still a nice balance with an emotional undercurrent, and despite how far-fetched and preposterous most of this film is, it is still able to get you to care about the characters.

If you care at all about cinema, you should go and see this film while you can. While it’s not perfect – the writing is sometimes a little too meta, for one – it’s great to see a good original film come out amid a cinematic landscape of endless reboots and franchise films, and it just makes for a fun time. It’s wonderfully silly, and the chemistry between Cage and Pascal elevates it a lot, making it more charming and endearing than anyone was expecting. 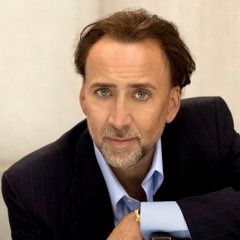 Nick Cage’s latest feature sees him playing himself in a hilarious satire of his own career and Hollywood in general.