Blood to Poison is a South African urban fantasy about a sinister family heirloom and historical rage.

Blood to Poison is a young adult (YA) urban fantasy by South African author Mary Watson. The novel follows seventeen-year-old Savannah, who is cursed by a blood curse that has plagued her family for generations. Those who suffer from the curse are consumed by anger and destined to die young. But Savannah refuses to suffer the same fate as those before her. She is determined to break the curse and free her family from its grasp.

The premise of the novel is an excellent one. The notion surrounding the origin of the curse, in particular, is gripping. The curse, we learn, originated from Hella, a relative of Savannah’s and a slave during colonial times. Hella cursed her enslaver and his descendants, entirely unaware that his child was inside her. How Watson roots the novel in South African history in this sense is extremely interesting and unique.

However, Blood to Poison failed to live up to the excitement roused by its premise. The mythology, which was intriguing at first, soon became confusing. The idea of the unity between the Jackal, Arrow, Worm, and Claw (the four witches and their magic) was particularly difficult to grasp. It felt that the plot lacked cohesion, jumping from point to point in the story without any real explanation as to what was going on. Sadly, this added to the overall sense of confusion, as did Watson’s inclusion of unnecessary subplots, such as the romance between Savannah and Dex. Perhaps if there was less focus on Savannah’s romantic entanglements, the main plot of the novel would feel stronger and more cohesive.

All in all, the concept behind Blood to Poison is extremely interesting; the novel has great potential. Unfortunately, though, it is slightly let down by the jumpy plot and the grey areas of the story which feel unexplained and underdeveloped. 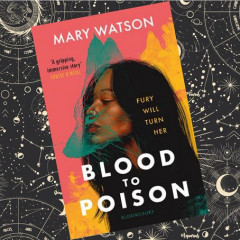 Blood to Poison is a South African urban fantasy about a sinister family heirloom and historical rage.