A stunning debut, Memphis is a portrait of familial bonds, sisterhood, friendship, and community.

Described by Tara M. Stringfellow as an ode to her city and the Black women living in it, Memphis is a spectacular debut rich with Southern charm. The novel follows the story of Hazel, Miriam, August, and Joan — three generations of a Southern family. A blend of both fact and fiction, Memphis is woven from Stringfellow’s family history — her grandfather’s murder at the hands of his own police squad, her grandmother’s activism, and her stories of Martin Luther King. In a non-linear narrative with lyrical prose, the challenges, tragedies, and dreams of the lives of our four protagonists are slowly revealed.

Memphis is a mesmerising novel that allows us to see the perspectives of all four female characters. With novels that offer multiple perspectives, you often find that at least one character’s chapters feel rather dull. But this certainly is not the case with Memphis. Each woman has a story that is equally unique and captivating, and each woman is equally endearing and unforgettable. Although Memphis is a relatively short novel (under three hundred pages long), it does not lack character development. Stringfellow is an expert in making you feel as though you know each woman on an intimate, personal level.

Memphis is an undeniably heartbreaking read. Nonetheless, it was beautiful to witness the family dynamics and community solidarity at playl. Although all of the women have had their lives ravaged by some form of tragedy, they come together to heal. In this sense, the novel can be seen as a celebration of sisterhood and life.

Memphis is a beautifully written novel and a tribute to resilience, with a wonderful cast of characters. 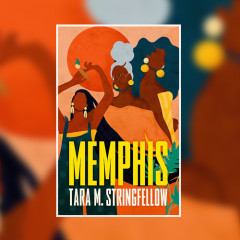 A stunning debut, Memphis is a portrait of familial bonds, sisterhood, friendship, and community.