Voice MagReviewsReview: Dave Made a…

This quirky indie flick is as silly as its name suggests.

In watching a film named Dave Made a Maze, you’re likely to have a few expectations going in. It’s probably going to be a silly comedy, it certainly sounds like an indie film, and it likely involves a maze of some sort. You’d be absolutely right to have those expectations, and you may have more beyond those, but whatever they are… the actual film is probably much weirder. Bill Watterson’s feature directorial debut Dave Made a Maze is easily one of the quirkiest and most unique films you can see.

The premise of this indie flick is simple. Annie (Meera Rohit Kumbhani) comes home one day to the apartment she shares with her boyfriend Dave (Nick Thune) to find that he has gotten himself stuck in a cardboard maze he built in the middle of their apartment. Unfortunately for Dave, his maze does not remotely obey the laws of physics (or anything we know about reality, for that matter), and it is infinitely bigger on the inside. Dave, unseen and shouting from deep within his cardboard labyrinth, convinces Annie to invite their friends over, and eventually they decide to venture deep within the depths of the maze. They quickly realise that Dave wasn’t lying about it being bigger on the inside, and the paper horrors that await them spell certain adventure.

One of the single most impressive things about Dave Made a Maze is the set design. Seeing as the majority of the film takes place within a magical cardboard labyrinth, it was pretty important that they got this right. And they really did. The sets truly make it feel like the characters are trapped within a maze made out of cardboard that is sat in somebody’s apartment, and while that sounds almost nonsensical, I promise it will make perfect sense to anyone that has seen it. The walls, floor, and ceiling are entirely covered in cardboard, as are the traps and horrors that the characters find in each room. There’s a minotaur made out of cardboard, odd flying creatures that resemble origami, a creepy cardboard replica of one of the characters that is chained (by cardboard chains) to the cardboard walls… it’s all super impressive and really helps the film’s immersiveness. They manage to make this bizarre, quirky concept feel believable and real.

Unfortunately, the characters are not quite up to the same standard. As a horror comedy, there are plenty of moments that are played for laughs, but many of them fall flat. The characters feel one-dimensional, and even by the end of the film there is really not much to know about them. Dave built the maze because he wanted to create something and have a purpose, and… well, that’s about it. That’s all there is to the eponymous maze-builder, and nobody else has much of a personality outside of cracking quirky jokes now and then. Worse still, the jokes often fall flat because these one-dimensional characters don’t have much chemistry with each other. It really highlights how important casting is. There’s such a huge difference between characters reciting their dialogue and characters bouncing off each other and feeling like genuine people, and it really shows at times in this. It’s not all bad though: some of the jokes do land, thankfully.

While the story itself is rather simple, owing to the one-dimensional characters with one simple goal (getting out of the maze), the setting lends itself to a lot of creativity. There are some really fun moments where it switches from live-action to animation, and some of the horror aspects are genuinely creepy, which is surprising for such an idiosyncratic film. Watching a cardboard replica of one of the characters trying to pretend to be human was genuinely unsettling at times.

Dave Made a Maze is, all in all, plain weird. But it is also full of creativity and admirable filmmaking, especially when it comes to the set design, and while it’s unlikely to end up on your favourite films of all time list, I’d be lying if I said it wasn’t worth a watch. (And it’s only 80 minutes long!) 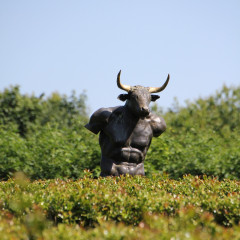 This quirky indie flick is as silly as its name suggests.