Idles have become one of the leaders in punk in recent years with their ferocious frontman Joe Talbot leading the pack. This four track set showcases some of the greatest moments in their new album Crawler, and demonstrates why the band have become so successful.

Starting with ‘When The Lights Come On’, the atmosphere adopts a spacey, more mysterious tone. Sonically the track is rather soft for a punk band, however Joe’s voice is filled with urgency, adding depth and power to the track. Considering there's no audience (except a radio host) the band still manages to exude punk rock, and you can really feel the intense energy through the screen.

On the contrary, ‘The Wheel’ is a much more classic take on punk rock – thrilling and punchy with angsty vocals and bags of enthusiasm. You'd be forgiven for thinking that Joe is a rather scary character, but rest assured that this is just part of the fantastic theatrics of an Idles show. The little snippets in-between songs, where he addresses the radio host and introduces songs, really shows his humility as a character, especially with how softly spoken he is.

It’s interesting to watch the dynamics within the band. Although Talbot is the frontman every member has their own characteristics that shine through, not least Mark Bowen who plays guitar and keys in the band. (Overlooking the fact he really does look like comedian Joe Wilkinson).

‘Meds’ is the second to last song in the set. It manages to keep the flow within the performance whilst also adding more of a tuneful pop sound melodically in parts, allowing the songs to all connect together. ‘Meds’ also added even more energy to the set, which I wasn’t sure could actually be done as Idles are always so committed to their live performances – making them great to watch live both in person and over a screen.

‘Car Crash’ was the chosen tune to close the set. Its screeching guitar and keys are indeed a metaphor for the title. A track about Joe trying to piece his life together, it’s lyrically profound and raw. It's a fitting ending to this set as it really gives you a flavour of how Idles approach their music and the quality of lyricism all their tracks involve. ‘Car Crash’ also has insanely electrifying guitar, making it a great final showcase of the band. 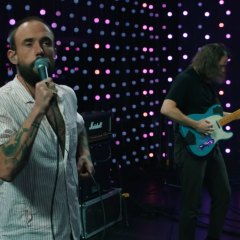 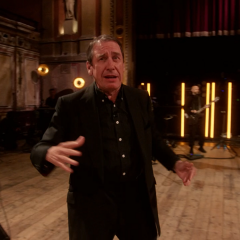