Bridgerton fans found a diamond in its first season, but does the second season hold up the golden standard?

The second Bridgerton season is upon us, and we turn our attention to the love story of the cold Viscount Anthony Bridgerton (Jonathan Bailey).

This season is based on Julia Quinn’s second Bridgerton novel ‘The Viscount Who Loved Me’, and just like the first season, it is adapted for the screen by Chris Van Dusen and produced by Shondaland. Following the hit success of the first season, which enraptured 82 million households within its first 28 days of release, the second season is still all things Jane Austen and flowery romance.

However, it feels quite different from the first season. More light-hearted and comfortable with its own pacing, it takes confident strides away from the events of the first season to ground the strong voices and stories at present. From Lady Violet Bridgerton (Ruth Gemmell) to our coveted gossip girl Penelope Featherington (Nicola Coughlan), the season delves deeper into the many facades of our favourite characters with a specific focus on the stubborn Anthony Bridgerton.

Moulded straight from the bust of Mr Darcy, we follow the Bridgerton household’s eldest son Anthony, and his quest to find a suitable Viscountess with his many rigid requirements – notably, all of his lists are devoid of one thing, love. The arrival of the Queen’s diamond of the season, the sparkling Edwina Sharma (Charithra Chandran) and her protective older sister, Kate Sharma (Simone Ashley), marks the beginning of a whole lot of misunderstandings and miscommunication.

The season is notably tamer and slower-paced which might have some fans disappointed about the new direction the show heads towards, a less fiery and raunchy reality. Perhaps, the slow burn romance will be here to stay, but it has proven to be a touch too slow for some viewers considering the accelerated pace of the first season. Scroll through Twitter and you’ll find a frightening army of Regé-Jean Page fans still mourning the Duke’s lack of appearance.

However, the beauty in Bridgerton’s format is the fact each season revolves around another Bridgerton sibling whilst enriching minor characters in subplots that prepare them for their own season. Controversial, but Duke Hasting’s appearance and the reduction of intimate scenes are not necessary to make the season a success.

Olivier-award-winning Jonathan Bailey’s acting as Anthony Bridgerton is completely enchanting, and enough to carry the season. A character that became hit-or-miss during the first season enters a redemption arc that makes sense of his entire past and why he ended up going all Mr Darcy on everybody. Bailey’s reactions are always shifting even when he is not the focus of the shot, and his sensitive interactions with co-star Simone Ashley are fuelled with emotion that is difficult to distinguish as disdain or care.

The introduction of the audacious Kate Sharma (Simone Ashley) is a welcome one, a character all too similar to Anthony Bridgerton – both holding the responsibilities of their family heavy on their shoulders, and too proud to perceive it as a burden. Kate is played with strength and vivacity, which makes the chemistry between her and Anthony all the more electric as the season progresses.

Unfortunately, like the Featherington’s loud and mismatched patterned dresses, the subplots of this season felt a touch too ludicrous and distracted from the matter at hand – the romance. Free-spirited Eloise Bridgerton (Claudia Jessie) undertakes a mission to uncover Lady Whistledown whilst discovering London’s spheres of political critical thinking. Second son Benedict Bridgerton (Luke Thompson) goes to art school, which isn’t nearly as interesting as his queer storyline which has been completely abandoned from the first season. Colin Bridgerton (Luke Newton), like a lost puppy, comes back from his gap year filled with overbearing stories and heaps of opium that bordered on dreary viewing.

The threads of the story are just barely held together by the hilarious and meddlesome commentary of Lady Violet Bridgerton (Ruth Gemmell), Queen Charlotte (Golda Rosheuvel) and Lady Danbury (Adjoa Andoh).

Bridgerton had its punchy debutante, and some may say it has already eaten its cake, but season two has settled into a lovely rhythm that only makes us anticipate the third season’s release all the more. For now, we are left with picking up the remains of the internet, which has since been sent into a flurry over both Jonathan Bailey and Simone Ashley. As Queen Charlotte notes, we all wish to be entertained – and Bridgerton season two does that in one joyous 8-hour long sitting that we all can’t get enough of. 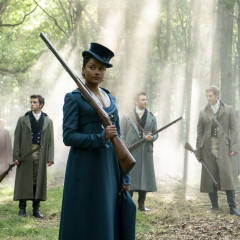 Bridgerton S2 Review: do we still burn for an enemies-to-lovers trope?

Bridgerton fans found a diamond in its first season, but does the second season hold up the golden standard?