Bitter is a highly original novel that explores the crossovers between social activism, mental health, and art.

Bitter is the prequel to Pet, a young adult novel by New York Times bestselling author Akwaeke Emezi (they/ them). Readers of Pet will recognise the protagonist Bitter as Jam’s mother, who we meet here as a young woman studying at Eucalyptus, a special school for creative teens. But outside the haven of the school, the streets are filled with protests against the deep injustices felt by the people of Lucille. Afraid of the outside world and its violence, Bitter locks herself away in her room. But when she unknowingly starts a revolution with her artwork, she is forced outside to face her demons.

Although Pet and Bitter are aimed at an audience of the same age, Bitter feels like an inherently different story. Unlike Pet, which can often read like a middle-grade novel, Bitter feels very mature with its exploration of romantic relationships and teenage drinking. Despite this, the two novels complement each other very well, as Bitter reveals much of the backstory behind Pet. Most interestingly, we learn about the mythology of Lucille and how angels are brought into being through art — aspects that Emezi only vaguely describes in Pet.

However, the novel’s greatest merit is how Emezi deals with extremely heavy topics in a way that is accessible, namely through their use of magical realism and incredible characterisation. Using magical realism, Emezi explores how art can serve as a form of activism against racism, homophobia and police brutality. In this sense, Emezi also stresses the importance of non-violent means of protest. In addition, Emezi explores mental health through the character of Bitter, who, with the help of her friends, we see progress and overcome her anxiety by the end of the novel. 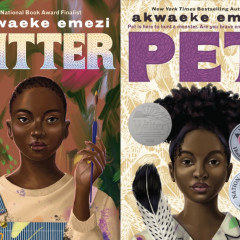 Bitter is a highly original novel that explores the crossovers between social activism, mental health, and art.