We checked in with entrepreneur, TV presenter, mother of four and singer/songwriter Stacey Jackson to talk all about her latest new single 'FLIPSIDE', what she misses from the '80s and what she has in store for the future.

For entrepreneur, TV presenter, mother of four and singer/songwriter Stacey Jackson, the 1980s acts as one of the most pivotal and influential decades of the last few generations. Over the last few years, there has been a great deal of nostalgia that has called back to that era. We checked in with Stacey Jackson to talk all about her latest new single 'FLIPSIDE', what she misses from the '80s and what she has in store for the future.

Hi Stacey, first of all, we just wanted to thank you for joining us, how are you doing?

‘FLIPSIDE’ has reached number one on the Global Digital Radio airplay, congratulations! How does it all feel?

Yeah, I was really pleased about that! I am so connected to this song that it was really a special moment for me when I found out.

Can you tell us a little bit about the birth of ‘FLIPSIDE’, where did it all start?

During lockdown actually. The lyrics really resonate with a lot of people who wish they can be in two places at the same time. Having so many commitments and obligations and people who rely on you but if you aren’t happy with YOU and don't have any time to focus on the things that make you happy. Even if it means taking risks to find that happiness, then you can’t be a whole YOU.

What do you think has caused ‘FLIPSIDE’s’ amazing success?

I think it was a number of things. First I guess the message was quite empowering, but the record does have this ‘80s feel to it so it brought a lot of people back in time I guess. Plus the song is the theme to my TV show ‘Stacey Jackson in the ‘80s’. I suspect the combination of all that helped.

With all the work you have going on, being an entrepreneur, TV presenter and mother of four, what does the songwriting process look like for someone with already so much on their hands?

Well, sometimes creative projects just don’t get finished immediately… And I just have to compartmentalise…  But I kinda like that, it brings me back to the days in uni when you had so many papers to write!  Sometimes it works out better when you put something away for a little while and then revisit it a bit later with fresh eyes and ears. Any free time I have I am either writing a song or an episode of ‘Stacey Jackson in the ‘80s’!

You’re currently in the process of airing your latest weekly show Stacey Jackson In the ’80s, why is this decade the one that resonates with you the most?

I literally grew up in the ‘80s. (Try not to do the maths, haha!) I was a proper ‘80s rocker in an original band at 15-years-old writing songs and then in the late ‘80s, I used to teach aerobic classes and fell into the more dance-pop sounds of the era which lived so well in the gyms. The ‘80s was literally my era. So when the producers called for me to audition for the show I would have been soooo gutted if I didn’t get the job!

Can you tell us a little bit about what’s in-store for 2022?

For sure! I have an EP of original tracks and 2 EPs of covers that will be released over the year or so. And I finished my first book which will also be coming out at the end of this year. Plus I’ll be continuing to host Stacey Jackson in the ‘80s for as long as I can!

If there was one thing from the ’80s that you wished made a comeback, what would it be?

Definitely NOT acid wash jeans! But I have always loved BIG hair. I should have bought stocks in Elnet when I was a teen. But musically, I think the ‘80s have already made a bit of a comeback with Dua Lipa, The Weeknd and other artists tipping their hats off to that sound.

Are there any tracks at the moment that you can’t stop listening to?

I just discovered Steps’ acoustic version of the song ‘What the Future Holds’ and I love it as much (maybe even more) than the original. But it’s such a pumping record. 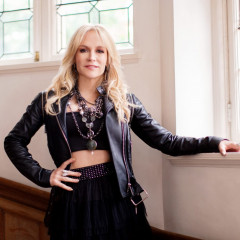 We checked in with entrepreneur, TV presenter, mother of four and singer/songwriter Stacey Jackson to talk all about her latest new single 'FLIPSIDE', what she misses from the '80s and what she has in store for the future.