House of Sky and Breath is a sensational fantasy novel with an exhilarating plot and an unforgettable cast of characters.

The Crescent City series marks bestselling young adult author Sarah J. Maas’s first foray into adult fantasy. Taking advantage of her newfound narrative freedom, Maas tells a much darker, complex story here — and one that is infused with steamy romance. Her new narrative style won over readers of House of Earth and Blood, the first book in the Crescent City series, from which House of Sky and Breath follows. In House of Sky and Breath, Bryce Quinlann, our beloved heroine from book one, again takes centre stage, along with her lover Hunt Athalar. In the wake of the tumultuous ending of House of Earth and Blood, namely the death of archangel Micah Domitus, Hunt and Bryce are attempting to lay low and define their new normal together. That is until they get pulled into a rebellion against the Asteri (the god-like beings who control their home of Midgard) along with Tharion, Declan, Flynn, and Bryce’s brother Ruhn.

House of Sky and Breath is an exhilarating, propulsive read — despite its length of 800 pages. Not only is it full of action-packed adventure, but plot twists that leave the reader playing detective for the majority of the novel. As a result, you cannot help but plough through the story. Without giving away any spoilers, the plot twists tie back to Danika Fendyr, Bryce’s best friend, who was murdered in book one. Despite Danika being dead, she is an integral part of the plot here, as Bryce attempts to unravel her best friend’s many secrets and her role in the rebellion. In this way, Maas not only keeps Danika relevant but builds upon her character, which felt slightly undeveloped in House of Earth and Blood.

On a similar note, House of Sky and Breath is far more character-driven than book one. Perhaps this is what makes the novel so refreshing — we are given a slight reprieve from all of the war and fighting as Maas allows us to indulge in the relationships forged between her characters. It was particularly enjoyable to watch the relationship forged in book one between Bryce, our powerful,feminist-icon of a heroine and Hunt progress into something far more serious here.

With the ending of House of Sky and Breath leaving the fates of several characters up in the air, Maas has left us hungry for book three. 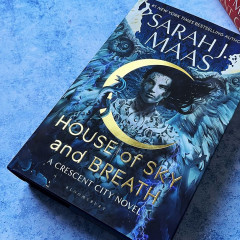 House of Sky and Breath is a sensational fantasy novel with an exhilarating plot and an unforgettable cast of characters.