Stephen Graham is excellent in Philip Barantini’s stressful single-take drama, but by the end, it all feels a little hollow

Anyone who’s worked in a kitchen will tell you how unbearably stressful it is, and Boiling Point, Philip Barantini’s sophomore feature, for the most part does a good job of capturing the chaotic atmosphere. But stressful realism does not a good film make, and by the end of the film it all feels rather hollow, despite Stephen Graham’s excellent performance.

The drama comes from the exact scenarios you might envision when you think about a stressful high-end restaurant: rude and obnoxious customers, an incredibly busy kitchen, an unrelenting manager. The single take – which was apparently done without “cheating,” i.e. they actually filmed it all in one take – does add to the tension and stress at times, working to put you in the shoes of the restaurant staff as they attempt to juggle all their responsibilities. Unfortunately, it also feels like an unnecessary gimmick, and it takes much more away from the pacing – and the narrative itself – than it adds to it. There is a scene, for example, about halfway through where a member of staff goes out of the back of the restaurant under the guise of “taking the bins out” to buy drugs from his friend who is parked in the back alley. It adds nothing to the plot, we barely see that character again, and the only reason that scene is included is so that there’s an excuse to leave the busy restaurant and give the audience a break from the stress of the scene. If they didn’t insist on the single take gimmick, they’d have been able to simply cut away, but instead they’re forced to insert an entire sequence that just feels pointless in the end. There are too many moments like this for the single take to be a justifiable formal choice.

Beyond the formal structure, the actual drama in Boiling Point starts off decently: Andy Jones (Stephen Graham) is the head chef, struggling with a recent divorce; the restaurant’s health and safety rating is dropped from a 5 to a 3, and the inspector bins some of their stock; they are overbooked on the busiest night of the year; and a top food critic turns up out of the blue. There’s plenty of drama, and while it starts well, with all the tension a film like this should have, it fizzles out much too early. Barantini is unable to maintain the tension for very long, and it didn’t take too long (for me anyway) for fatigue to set in, which led to me simply not caring what happened.

It all feels like it amounts to nothing. There’s a Chekhov’s Gun moment in the first act for example that adds a bit of tension, when a customer notifies the staff of her severe nut allergy. “Okay,” you think, “that’s surely going to come back into it later on.” And it does, but by that point, every single thing that could possibly have gone wrong has gone wrong. It’s exhausting. There should have been at least a few red herrings – like the nut allergy – to add some tension, to make you think it’s going to come back into it, and to pleasantly surprise you when it doesn’t. Unfortunately Barantini opts for what is essentially misery porn by the end, which is summed up by the incredibly bleak, unfulfilling, cop-out ending. It’s all so goddamn histrionic that I burst out laughing during the final scene, which couldn’t be further from how you’re supposed to react.

Boiling Point is formally impressive and has some great performances. It’s just a shame that everything impressive about the film’s form is ruined by the fact there’s no justification for it in the first place, and that the performances are ruined by a very poor script. I will be very surprised if the people raving about this film even remember it five years from now – it’s easy to be blinded by Stephen Graham and the wondrous one-take, but there’s absolutely nothing beneath the surface. 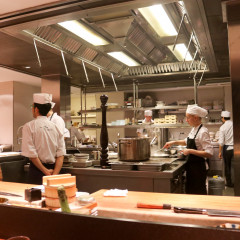 Stephen Graham is excellent in Philip Barantini’s stressful single-take drama, but by the end, it all feels a little hollow