Stepping inside the theatre again has felt liberating after lockdown. Yet, Stef Smith’s adaptation of an Ibsen classic takes you right back into the household and doesn’t let you out. You are encased with the protagonist, Nora, in her dollhouse for a captivating tale of domestic agony.

Smith’s adaptation follows the same narrative structure as Ibsen’s play. It centres around Nora Helmer, wife to (in this version) Tom, who the previous year was struggling with an illness. Nora illegally obtained a loan in order to save the family from financial ruin, as Tom was out of work during this time. Fast forward to present day and Nora is visited by Christine, an old friend. Finally able to open up about her situation, the past comes back to haunt Nora and her life begins to unravel.

However, the main difference between this version and the classic, is that Nora and Christine are all played by the same three actresses interchangeably. It is this choice that makes the adaptation so delightful. Each actress encompasses a different era, easily identifiable from their costumes. Nora 1 is from 2018, Nora 2, 1968 and Nora 3, 1918.

It is never confusing when one is playing Nora and then Christine, the actresses comfortably transitioning into each role, never the same as each other, but also borrowing subtle aspects of their portrayals. They keep the play alive, and reflect Nora’s state of mind. As she becomes more distressed the roles change rapidly, impacting the audience more this way.

The different eras are also intriguing. Not only are the audience treated to some lush costumes from the respective periods, but it also serves a political purpose. Nora is not one woman but a different woman in each era, encountering the same issues. Patriarchy and its oppression of women seem endless in this instance. To explore three alternate time periods and their gender issues so well, and in such a short space of time, is a testament to the quality of this production.

Smith creates a multi-layered piece that doesn’t just touch on women’s issues. Nora’s husband Tom’s illness seems to reference depression. Throughout the different eras, there are different causes for it. 1918 it seems to be PTSD from WW1, 1968 the changing role of the man as women’s rights spear onwards, and in 2018 the impact of social media on masculinity. It shows that patriarchy and rigid gender norms benefit nobody. You are not encouraged to feel sympathy for the deplorably  misogynistic Tom rather it reflects a crisis in masculinity that tends to be ignored.

Similarly Nathan is not a one dimensional character. An employee of the bank Tom has since taken over, his job is under threat. However, he has obtained evidence of Nora’s loan and threatens to expose her, unless she ensures his job security. His actions are morally dubious, however it is revealed he is a widower, fearful that he will be unable to provide for his children. Nathan is desperate rather than wholly evil, and shows the difficult situations capitalism forces people into. His character mainly highlights how disposable human beings have become, and makes this play just as anti-capitalist as it is anti-patriarchy.

Despite engaging performances and important themes, Nora does feel lacking in some respects. It feels too similar to the original. According to Smith that is the point, as she did not want to diverge from Ibsen’s original structure. However, going into the production I was hoping for something a little different, aside from three Nora’s. I’m not sure what that was, but it felt like there was something missing after I left the performance. Perhaps a twist that differs from the original plot, or an extra scene that boldly sets it aside from the original.

Other aspects could have been pushed further. For example, the relationship between Nora and Christine could have been developed further, although I can understand why it wasn’t. The play isn’t about Nora leaving one relationship only to enter another. The ending is hopeful, as she begins a journey to discover herself again. It is this message that resonated with me and ultimately made me feel satisfied by the ending.

The highlight of this production is definitely the three female leads. Yusra Warsama, Jodie McNee and Kirsty Rider, showcase their talents by bringing a new depth to the character of Nora. When she finally leaves her husband at the end, you are left wondering what each Nora did next, because you know these actresses could each produce something different and distinct. Who doesn’t love a play that keeps you guessing even after it's over? 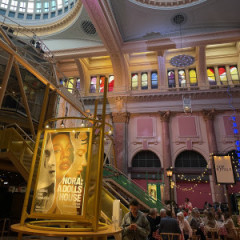