Cyrano is a musical film that is constantly dancing beautifully in different directions, it just doesn't know what direction is the right one

Director Joe Wright (Pride & Prejudice, Darkest Hour, Atonement) knows how to make iconic and visually stunning period drama films. When it comes to his first musical film Cyrano, it is aesthetically gorgeous like an ornate painting crafted with warmth and care. However, beneath the surface, Wright fails to hit the right notes.

Seasoned fighter Cyrano sticks to the sidelines despite being infatuated with Roxanne. Instead, Cyrano decides to ghostwrite love letters for the new military recruit Christian – who happens to be hopelessly atrocious with poetry.

Erica Schmidt returns to write the screenplay version of her adapted 2018 stage musical, based on the 1897 Edmond Rostand's classic play Cyrano de Bergerac. In the original play, Cyrano has a gigantic nose that society deems ugly (usually presented on stage with loud prosthetics). In Erica’s adaptation, written for her husband Peter Dinklage, it is Cyrano’s stature that grounds the story in a sense of reality.

From hushed comments about his height to literal sword fights underestimating Cyrano’s talents because of his appearance – the changes in the story provide a sense of realism.

Dinklage is the saving grace of the film, his expressive portrayal of Cyrano is full of sensitive nuances. Even when the quiet MVP is not focused in the shot, eyes are drawn to his harrowing expressions. To be so close to the one that he loves emotionally with so much to say, but unable to physically bridge that connection because of his own pride. Dinklage’s Cyrano is the tragic portrait of a celebrated hero, hopeless romantic and heartbroken bystander.

Cyrano is a melting pot of raw emotions, and the songs are equally as unfiltered. The inner turmoil of Cyrano’s situation is reflected in songs like the airy love song ‘Madly’ versus the bitter spoken word about his backstory ‘When I Was Born’ with lyrics unveiling his deeply carved life-long emotional scars ‘I am a monster, I am a mutant. A freak of nature’.

The songs attempt to explore the characters’ individual thoughts and desires. The innocent early days of a romantic connection is sung by Christian in ‘Someone To Say’. The lyrics are simple and repetitive to reflect Christian’s flaw of not being able to craft complex metaphors about his feelings, something that Roxanne breathlessly longs for in the tumbling beat-driven power ballad ‘I Need More’.

However, more times than not the songs are either forgettable or unforgivably memorable by order of how irksome they are.

In ‘What I Deserve’ the archetypal rich-man-simping-for-a-wife villain De Guiche (Ben Mendelsohn) strides through dark streets flatlining his rock-like anthem in some Mamma Mia! Pierce Brosnan nightmare fuelled crime against movie musicals. What the song does deserve is to be cut from the film.

Other songs are just misplaced in the context of the film. ‘Wherever I Fall’ written by Glen Hansard sensitively gives voice to three soldiers’ stories during a wartime struggle. It is possibly the most well-written song of the entire film, celebrating different forms of love. However, it appears out of thin air which makes the impact lacklustre. It is a disservice that ‘Wherever I Fall’ is Cyrano’s filler song, distracting from the plot rather than contributing to it.

Overall, it is Dinklage’s portrayal as a duel-talented energetic swordfighter and verbal jouster that saves Cyrano from becoming a complete tragedy. For a movie musical about miscommunication, it sure fits the bill. Cyrano is a film with something to say – Wright’s direction just doesn’t make it clear enough what that is. 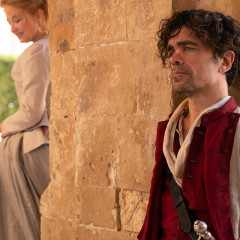 Cyrano is a musical film that is constantly dancing beautifully in different directions, it just doesn't know what direction is the right one