Jay Martin’s RedT’Blue made its long-awaited cinema premiere this past weekend in Nottingham. Having been met with critical and fan acclaim alike, what is the official verdict from us based over here at Voice Mag?

Jay Martin’s ‘RedT’Blue’ (R2B) five-year journey to its premiere has been anything but straightforward. Indeed, Martin has had to jump a number of hurdles including funding, delays and even a pandemic before the documentary was finally able to debut.

I was lucky enough to not only interview him and some of the other stars involved in the documentary, but also to attend its premiere and the afterparty this past weekend at the Broadway Cinema in Nottingham. To call the day a premiere of only his documentary, however, feels unfair given all that had transpired. Martin had seized control of the spotlight that had been shone on him by both the critics and the fans and turned it on his peers by showcasing the arts and culture that is bursting out of Nottinghamshire.

The award-winning documentary chronicles the story of the constituency of mining town, Mansfield. Mansfield was historically a safe ‘red’ seat and was held by Labour for 94 consecutive years. The 2017 election changed everything as it was one of the first historically safe red seats to go ‘blue, when Mansfield voted Conservative and swapped out Sir Alan Meale (Labour) for Ben Bradley (Conservative). Martin documents this unprecedented political event and how the town transitioned from ‘RedT’’Blue.’

Martin forgoes putting a political spin on things and objectively explores why this change occurred. The film draws on the perspectives of the major players who themselves were involved within the story; ‘Red’, ‘Blue,’ UKIP, and local perspectives are explored to paint as comprehensive a picture as possible.

Martin does an excellent job at remaining neutral with what is an inherently polarising subject in politics. In fact, at the after-party he even told me a quip that was made to him by Ben Bradley (Conservative), who remarked he still was unsure who he voted for. This simple comment attests to just how well Martin told the story without getting entangled in the politics one could have forgiven him for getting caught in. R2B offers an objective look at the factors that contributed to the result of the 2017 General Election, telling a narrative free from an underlying agenda.

Yet, this does not detract from how engaging and frankly entertaining the documentary proves to be. Indeed, myself and those around me were so engrossed that we were surprised when it had finished! The 2017 General Election in Mansfield is an inherently riveting story, and this is understood by Martin, who steps out of the way of the story and allows it to shine without obfusticating it with another agenda. A lesser producer may not have necessarily have had the self-awareness to make this difficult decision, yet he does so, and the documentary is the better for it.

My only critique of the documentary’s plot is one that it would be unfair to attribute blame for to Martin. The ‘Red’ voice is one that is lacking in representation from any official MPs of The Labour Party, ‘Blue’ comparatively is very well represented, and this allows a much better look at their side of the story. Martin assured me, however, this was not for lack of trying, as he did attempt to reach out to the party. Although, to his credit he did circumvent the issue by including individuals who are associated with them. This does resolve the issue to a degree, but one cannot help but feel it would have benefitted from Labour MP representation to match that of the Conservatives.

There is something to be said of the representation of women and ethnic minorities in the documentary. Sienna James of Voice Mag in her preview review alludes to this and covers it far better than I could do here, although this could be attributed to the fact the documentary looks at the mining element of Mansfield – something that did predominantly affect white, middle-aged men.

In addition to a compelling narrative, R2B actually has a musical score that is composed entirely from scratch by the excellent Jack Bennett. In R2B’s Cold Open, he discussed how he wanted to use strings but still remain as neutral as the plot is. The strings are an inherently emotive set of instruments but he was well aware of this in his composing, carefully timing the emotive moments to ensure that the audience is not swayed one way or the other. Bennett’s musical score does justice to the story of Mansfield.

The extent of my cinematography knowledge is looking at those drone shots of the town and thinking, ‘ooh, that’s nice.’ At R2B’s afterparty though, I was able to speak to some film students who attended and educated me. When we were speaking, they told me about what they thought was the mark of good cinematography; when the critical part of their brain turns off, they know that they are watching good cinematography. With R2B, all of them said that this is what happened, and I can certainly attest to just how good it was.

Granted, there is room for improvement and in particular the inclusion of a wider collection of voices. although, this could very well be attributable to the documentary’s subject matter being something that predominantly affected the middle-aged white male demographic in Mansfield.

This, however, does not necessarily detract from the overall quality of the film in any meaningful way. Martin’s non-partisan approach enables him to step aside and let the story of the town shine through, polishing it off with beautiful cinematography and a music score expertly composed especially for R2B.

Martin punches well above his weight and what makes the documentary all the more impressive is that he funded the entire project himself, he persevered through various delays and weathered a global pandemic. R2B is well worth watching, and perhaps even more significantly so is the career of Jay Martin 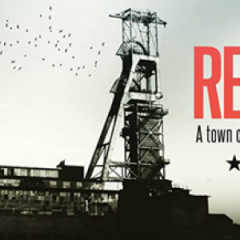 Jay Martin’s RedT’Blue made its long-awaited cinema premiere this past weekend in Nottingham. Having been met with critical and fan acclaim alike, what is the official verdict from us based over here at Voice Mag?