Celebrating the launch of her brand new album titled You Signed Up For This, Maisie Peters took to the stage at London's Lafayette to put on an intimate performance for fans.

Opening with the title track, the crowd were more than ready to greet the new songstress of pop. The song has a chorus filled with enthusiasm that makes you want to bob up and down letting go of inhibitions and allowing the music to take you away. For such a small venue, Maisie put on a performance worthy of the likes of Brixton Academy, perfectly transitioning into This Is On You, an anthemic pop song that the young crowd seemed to relate to.

Slowing the evening down, Maisie played an acoustic guitar for a rendition of her first-ever single, Place We Were Made. The stillness of the track draws the crowd in as the singer uses the intimate venue to her strength. Similarly, Favourite Ex features Maisie’s warming vocals alongside the gentle strum of an acoustic guitar as the crowd swayed to the chorus.

Bringing the energy back, the sounds of Psycho filled the venue. Its enthralling chorus and catchy pop melody make it easy to see why Maisie is a fast-rising star of British pop – already working with the likes of James Bay and Ed Sheeran.

Worst Of You was the track of choice to end the night with its melodic chorus and powerful vocals.  As Maisie's band played immaculately, the audience took over the chorus with passion and excitement as a roar of cheers and clapping was heard.

However, an Encore was on the horizon as Maisie reappeared to the stage for a final track - John Hughes Movie. An energetic tongue and cheek romance tune that thrills the audience. This fun and punchy track was the perfect way to end the show.

Bright and fresh Maisie's debut album launch is an exciting showcase of the young artist's career path. If you have a craving for modern carefree pop, Maisie Peters is an absolute must! 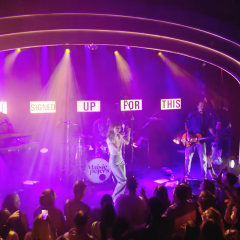