This animated short conveys feelings of loneliness effectively and creatively through the story of a fox.

What initially appears to be an adorable animation about a fox is actually a moving exploration of loneliness and belonging. Whilst the creator, Madeleine Tizard, shines a light on the urbanisation of wildlife communities, she also creates a very human experience when portraying the fox - one you can identify with yourself.

The animated short concerns a fox – an unlikely protagonist – pattering around an overwhelmingly built-up city. Illustrated scribbles of people swarm around the small creature as the sounds of the city accompany it. The fox ends up in an alley where a group of foxes burst out of a rubbish bin. There’s a moment where the protagonist looks at their fellow foxes with a look of disdain. You understand that they do not want to be there. The fox goes to sleep, and when they wake up, the others have gone.

Scampering around the city, the scene feels chaotic. City sounds and the music do not blend together well, reflecting the fox’s panic. Eventually, they come across a puddle, the animated fox seeing real-life footage of trees blowing in the wind.They set off on a journey out of the animation and into footage of the countryside. Here there is the sound of birds twittering and a gentle breeze. Finally, the fox settles to sleep, seeming to be at peace.

Tizard and the creative team contrast urban and rural landscapes beautifully. From the foxes forced to scavenge to the sounds of traffic, you can understand why our main fox does not feel like they belong. When they head into the crowd alone, they lose their orange fur, becoming colourless like all the busy passersby. Once the fox enters the peaceful countryside, you feel calm and glad the fox is no longer amongst all of that chaos.

The use of real footage is particularly powerful when in the countryside. Life can be seen clearly because the fox is where they belong. There is also a strong environmental aspect to this contrast. The fox feeling lonely, almost fearful of the urban environment, represents the creator's message of displaced wildlife. When the fox is finally in the countryside, their calm suggests a sense of belonging, and you realise it is because it is back in the natural world. 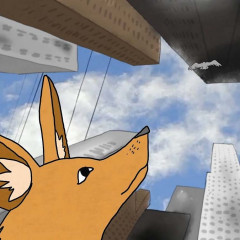 This animated short conveys feelings of loneliness effectively and creatively through the story of a fox.