A show brimming with confidence, playfulness and ridiculously good music

Formed on the Isle of Wight in 2019, Wet Leg has had a remarkably fast rise to fame thanks to their single Chaise Logue becoming a viral sensation with over 6.5 million views. The talent and charm of Rhian Teasdale and Hester Chambers, alongside their band’s brand of humorous indie anthems, have made them one of the hottest acts around.

The duo recently performed their first-ever Tiny Desk (home) concert, an iconic pit stop on the rise to fame for many new artists and seasoned pros.

Opening with Chaise Lounge the band set the pace for the rest of the show. The song has an unmistakable guitar segment building into the chorus whilst Rhian’s talk-singing vocal is smooth with a dash of assertiveness that helps develop the narrative of the song and create more of an atmosphere. The chorus has an unapologetic guitar solo and a catchy drum beat helping capture the excitement of the band. Considering they’re in what appears to be a small rehearsal space, their energy and confidence still pours out as the whole band look and feel incredibly tied together.

Too Late Now was the second song in the set, and proves the band’s diversity with a more  chilled and soft pre-chorus layering itself with synthesisers to add a cosmic feel. One thing about the performance that struck me is how the band are able to hold your attention despite the lack of huge stage props and bright lights, and their charisma shines through on every track regardless of how little speech there is between tracks – instead letting the music speak for itself.

Oh No slides into the setlist comfortably with its anthemic indie melody that sees the band lean into the performance, and enjoying every moment. Similarly, final track Wet Dream incorporates powerful vocals and infectious guitar chords not dissimilar to the likes of The Vaccines.

It’s easy to see why Wet Leg has gained so much popularity in a short period of time. Their colourful style of dressing that all the cool kids aspire to replicate, their rather comedic yet important lyrics, and their ability to craft easy listening indie rock anthems was all perfectly showcased within this performance. Despite no audience or fancy stage lights, they manage to hold your attention throughout immersing you into their wonderful world. 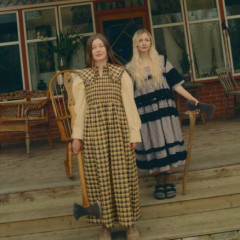 A show brimming with confidence, playfulness and ridiculously good music