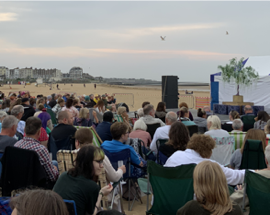 On the 24th of July, I went to an open air production of A Midsummer Night’s Dream, put on by Changeling Theatre, on Margate Beach. The play was performed very well, the characters were well formed and it was easy to become engaged with the play. I was surprised that I was able to follow the storyline as easily as I did, because I didn’t expect to be able to - Shakespeare isn’t necessarily as inaccessible as I thought! I think the theatre company’s production of  A Midsummer Night’s Dream had a large part to play in this - it was easy to follow the different characters as they were all so different from one another; I thought Puck in particular stood out. The addition of dance routines and specially composed pieces of music made the play more relevant and easier to relate to for younger audiences.

The costumes were very effective. Each group of characters had a clear style, which made it easier to keep track of who was who. The Athenians wore modern clothing, the mechanicals wore jeans and t-shirts, and the fairies’ costumes were made from eye catching fabrics. Hippolyta and Puck were the only two exceptions, which set their characters apart from the rest. Hippolyta wore a plain white dress with a body harness over the top - the character was played as being unhappy about her upcoming marriage to Theseus and the costume symbolised her feelings of being trapped or married against her will. Puck’s costume was based on a jester’s clothing, showing his role as a mischievous trouble maker.

The set was kept quite minimal throughout the play. The main piece of scenery was a tree used as part of the set for most scenes. The only other pieces of set used were some small stage blocks used as chairs, plinths etc. I thought this was really effective - keeping the focus on the actors, and making the most of a small stage area. Props were also kept to a minimum, in keeping with the overall aesthetic. The only time more elaborate props and costumes were used was during the mechanicals’ play; when a full lion’s costume, a knight’s outfit including sword and helmet, and a drag queen style outfit were used to great comedic effect, and supported the mechanicals characters well! 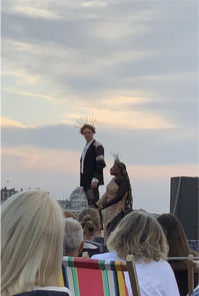 The only thing I disliked was to do with the setting. Being on the beach was nice, but there were a couple of major distractions, such as a drone flying overhead for some time, and a drag show behind us at the bar across the road from the beach! The cast coped really well despite these and some technical issues with their own radio mics, but in the future I would like to see the company at a different setting - for example in the castle gardens in Rochester - because I don’t think there would be the same problems with noise.

Overall I had a brilliant time! After watching the play I was more interested in performing myself, and have now joined a local drama group. It has also made me more aware of the importance of stage and costume design on a production, and I will use this knowledge when working on productions in the future. 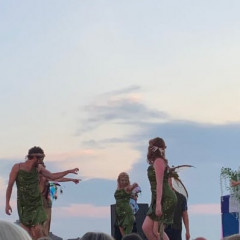