Shot in one take, Philip Barantini’s Boiling Point showcases the sheer intensity of life in hospitality, and the uncomfortable lengths in which workers have to exert themselves just to get through each day.

Kitchen life is not easy. As many would attest, juggling the many various facets the industry demands of you during every single shift is nothing short of overwhelming. Chefs have a heightened responsibility not only to get food out on time, but also to keep on top of aspects such as hygiene, allergies and difficult customers – all whilst helping their teams through intense services and unsociable working hours. Although some have tried to encapsulate the nerve-wracking nature of hospitality in films prior, Philip Barantini has delivered arguably the best depiction of the job, expertly conveying the brave dedication, increased stress levels and the absolute chaos that ensues whilst running a successful restaurant.

This superbly paced, one-shot feature looks at a particularly bad day for Andy Jones (Stephen Graham), a dishevelled head chef struggling to grasp not only his hectic work-life, but also his personal addictions and apparent family breakdown. The way in which the film articulates the mental health turmoil that hospitality workers have to navigate is masterful, managing to incorporate the many extreme feelings that they often have to go through on a daily basis, in an alarmingly relatable way.

From the offset the film makes its intentions clear. We first meet Andy running late for work, traipsing through dingy London streets to his restaurant whilst occupied by a heated conversation with his partner about his family issues, setting a precipice for the rattling experience to come. Once he arrives, he is greeted by his dependable sous chef Carly, who is in the midst of entertaining a particularly smarmy environmental hygiene officer before their shift starts. The officer is the first to stoke the chaotic fire that is to come, as Andy can be seen swearily taking out his frustrations of a three star hygiene certificate on others, constantly sipping vodka from a plastic bottle wherever he can.

Soon, service starts, and a barrage of customers are waiting for their food. Guests range from social media influencers insisting on off-menu ‘cremated’ steaks, a patriarchal racist man who takes pleasure in making waitresses' lives a misery, and a newly engaged couple with a nut allergy – to name a few. That is all without mentioning the arrival of a celebrity chef named Alistair Skye (who shares a fractured past with Andy) on a shady reconnaissance mission in the form of a date with a renowned food critic.

The restaurant is overbooked, the result of a poor maître d’ who has to then take the brunt of vitriol felt by the overworked kitchen. The venomous refrains aimed at her drive her tears, and see her lock herself in the bathroom as she composes herself. You feel sorry for both sides of the restaurant; the servers attempting to provide for the onslaught of customers and the kitchen desperately trying to keep up with overwhelming demand. It highlights the dichotomy of the two, and shows how communication is paramount for a successful shift.

Every character seems to have their own story within the film, from the gay waiter desperately attempting to inject energy and positivity into his job whilst plugging his DJ career, to the chancing kitchen porter who uses taking the bins out as an opportunity to pick up drugs whilst chefs are drowning in tickets. A young trainee tries to gain recognition for his cooking whilst wrestling with self harm, and an abrasive chef is less than pleased with Andy’s leadership, vocally chastising him and the situation whenever possible. The myriad of subplots within the world created by Barantini show the aspirations and limitations of the workers, amidst the cacophony of noise and stress during a frantic Christmas service. As you might expect, the intertwining stories and escalation of tension lead to an utterly captivating conclusion, one that will leave you squirming with panic.

Films that are captured in one shot tend to be compensating for a lack of substance, but this is certainly not the case with Boiling Point. Following the different characters around with a shaky camera only heightens the intensity and immersion felt by the viewer, so much so that it could be easy to forget that this film was shot in only four takes. The rapid timing of heavy story beats leave little room for a focus on direction, but in this instance, the use of the style is more than warranted due to its emotional impact, and aids the project rather than hinders it.

Overall, Boiling Point is a masterpiece of British filmmaking on a budget, expertly crafted in a way that does justice to the hospitality industry and the toll that the job takes on restaurant workers. The film highlights the many stressors and sacrifices that come with the job, and showcases the unhealthy vices that many chefs and servers end up partaking in. The role of a chef is one that is severely overlooked, and hopefully those that watch will learn to understand just how exhaustingly problematic the industry can be, and might start thinking twice about rushing chefs or complaining about trivialities when dining. 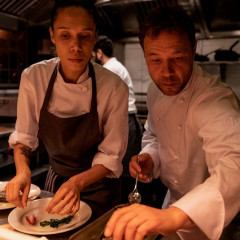 Shot in one take, Philip Barantini’s Boiling Point showcases the sheer intensity of life in hospitality, and the uncomfortable lengths in which workers have to exert themselves just to get through each day.