A review of the thrilling Everybody’s Talking about Jamie UK Tour!

Everybody’s Talking About Jamie shares the story of a young aspiring drag queen called Jamie New. The musical shows a clear duality between his school and home life. At home he feels free to be his true flamboyant self, whereas at school he is confined by the thoughts and judgement of his fellow school pupils, especially the stereotypical “school bully” Dean Paxton.

The story begins with Jamie in his careers lesson, with distressed teacher Miss Hedge struggling to control the class. We see Jamie experience homophobic comments from Dean Paxton. He then shares with the audience his dreams of becoming a drag queen before bursting into “And you don’t even know it”, a song whereby Jamie shows his clear passion to be a superstar.

We then meet Jamie’s Mother Margaret who is putting up birthday decorations for Jamie’s birthday, she is accompanied by her best friend Ray; Jamie is close to Ray, she is almost a father figure to him. Jamie is given a pair of heels for his birthday, and like a fierce warrior he wears them with pride before sharing a story with his mother of a time where his dad caught him wearing a dress. It is clear from that moment that Jamie’s relationship with his father is very unstable, he seeks approval from him, yet it is obvious he will not gain it. The emotional song “wall in my head” brings out the emotion that Jamie hides in his mind, this is incredibly moving.

Afterwards Jamie’s best friend, Pritti, is waiting for him in school for a revision session. He reveals to her his dreams to become a drag superstar. Whilst to start with she is confused by desires, Pritti begins to understand it and encourages Jamie to wear a dress to prom! This shows the delightful relationship they both have.

Jamie goes to visit a local drag shop called “Victor’s Secret”. We meet Hugo who goes by the drag name “Loco Chanelle”, he is a loveable and comedic character. Jamie chooses a dress from the shop, one which Loco Chanelle once possessed. Hugo then gives the backstory for the dress in the esteemed song “The Legend of Loco Chanelle”. He then invites Jamie to perform at local drag club “Legs Eleven”, this excites him.

Margaret New goes to visit Jamie’s Dad. She tells him she is “sick of covering” for him to which he announces that he is “done” with Jamie. The emotional song “If I met myself again” shows that Margaret wishes she had not met Jamie’s Dad, but she does not regret Jamie.

In the Act One Finale we see Jamie preparing for his drag show. He is nervous, Dean Paxton and the other school children have come to watch the show. We see him try to avoid going on stage, but Loco Chanelle encourages him to excel and be a warrior! Jamie eventually goes onto the stage, appearing as drag queen “Mimi Me”. We hear the sound of Dean Paxton shouting “Minger” and some music building up before the lights go down and we go into an interval. This is an exciting representation of how Jamie New has built up such confidence, a beautiful moment in the show.

Act Two begins with people gossiping of Jamie News’ performance at “Legs Eleven”. He reveals to fellow peers “Bex” and “Becca” that he plans on wearing a dress to prom. Dean overhears this.

Jamie New and Margaret New are called into school to discuss Jamie’s prom plans after a parental complaint regarding it. Ray goes with them. Miss Hedge denies him permission to attend prom in a dress, to Ray’s clear disgust. Dean Paxton echoes Jamie’s previous words “Funny how things work out in’t it” to Jamie, this shows where the complaint came from.

There is then a heart-warming song between Pritti and Jamie, she sings “It means beautiful” to him. This song is powerful and shows Pritti’s admiration for her best friend Jamie. The lyric “A little bit of glitter in the grey” is incredibly moving and is a slight summary to the theme of the show.

We then see Jamie go to visit his dad. He isn’t allowed into his house as he has some friends visiting him, another example of how Jamie’s Dad is appallingly ashamed of his beautiful son for being himself. Jamie tells his father about the drag show, Jamie is moved to feeling exposed and ashamed when his father asks, “Aren’t you ashamed?”. His Dad then says “I wanted a son so badly. And I got you”. This agonizing scene shows an end to Jamie’s relationship with his father. We see Jamie move from confidence to vulnerability, the song “Ugly in this ugly world” is full of heart-rendering lyrics showing the isolation Jamie now feels. This song has the exceptional power to move audiences to tears. The lyric “Ugly poisons everything I do now” shows that Jamie is processing the toxic comments that his father has just made as if they are poison and that they have made him feel Ugly, this scene truly speaks to everyone in the auditorium by creating an atmosphere of susceptibility and vulnerability on Jamie’s behalf. This is an incredibly desolate moment for Jamie’s feelings.

Jamie confronts his mother for covering up his dad’s clear lack of involvement in his life. Just after an emotional performance of “he’s my boy”, a song showing Margaret’s devotion to her son, we see Jamie on the streets drinking. 3 lads approach Jamie, they call him a “filthy”, “dirty”, ”ugly” queer, before attacking and spitting on him, an example of a hate crime. Hugo then runs towards Jamie who is clearly injured. Jamie tells Hugo that he is running away and that his life is a mess to which Hugo provides emotional support. Hugo tells Jamie “You’ve got everything to look forward to! This is your story – and it’s happening right now.”. Jamie then returns home; Ray is on the doorstep. Jamie tells her that he doesn’t think he has a dad anymore to which Ray says “you’ve always got me” this is emotional, it shows Ray and Jamie have a special relationship and that all is not yet lost. Jamie and Margaret talk, this scene is moving as it shows that their bond is unbreakable with the heartening song “My Man, Your Boy”.

Finally, we end with the prom, we see the students support Jamie in his choice to wear a dress. Eventually Miss Hedge allows Jamie to enter the prom wearing a dress. Before going into the prom Dean and Jamie have a stirring conversation which ends in Jamie offering to dance with him. Dean accepts, they go into prom together. The finale ends with the song “Out of the darkness”, a song showing acceptance and inclusion.

Layton Williams charmingly plays Jamie New in an emotional and energetic performance. We also see TV Legend Shane Richie playing the iconic role of Loco Chanelle/Hugo, he completely transforms the audience in a combination of laughter, tears, and joy. Amy Richardson stars as Margaret new, she moves audiences with her striking vocals and ability to show poignant emotion in key scenes such as “He’s my boy”. Shobna Gulati brings laughter to audiences, as Ray.

The show uses a very ambient set to create the multiple different locations of certain scenes. We see the classroom desks being used to represent a fence in “Wall in my Head”, a candidly creative way of showing the audience that we are in Jamie’s Garden. Another extremely inventive idea is the use of images being shown on the set itself. For example, when a scene is set in Jamie’s house, we can see rows of houses in Sheffield behind the house set itself. This adds to the atmosphere and shows that Jamie’s exciting life is contained in the cosmic world we all associate ourselves with.

In “The Legend of Loco Chanelle” we see Hugo singing into a microphone on a stand. This is incredibly artistic; it shows how sensational and dramatic Hugo’s backstory is. Shane Richie plays this part in a lively yet subtle way – there is always the risk of exaggerating the part of Hugo too much in this show, which was smartly avoided by Shane Richie.

Majority of the costumes in the show are rather simplistic, with school uniforms and casual clothing being seen throughout. This is extremely important to the show itself as when Jamie does wear dresses and heels it highlights how he feels different from the others, it also makes him stand out to the audience.

A final point to note is that all characters in the show have a name, there is no ensemble. This was something the author of the original script, Tom Macrae, points out regularly. It really does illustrate how each character is important in Jamie’s story, as well as promoting individuality and differences. Not to mention how clear it is that each of these characters has a life and is not simply a backing dancer or just there to fill space.

The Everybody’s Talking About Jamie UK Tour is showing until 30th April 2022 in the UK, it will also briefly visit Los Angeles in January and February 2022.

This show is a must-see for anyone who wants to go to a place where all are welcome. Truly a place of comfort, enjoyment and inclusion. 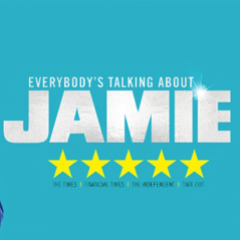 A review of the thrilling Everybody’s Talking about Jamie UK Tour!