Metalcore veterans and Brighton locals Architects performed an incredible set at one of the city's most renowned venues.

The Brighton Dome is a hub for some of the most popular comedy, music, and theatre, but last night saw the venue undergo a drastic change when compared to its usual events and performances. This time around, metalcore titans Architects were to hit the stage, in an unlikely homecoming metal show in one of the most regal venues that they have played.

The band put on a hell of a show too, one that was not only full of guttural screams, pounding blast-beats and fiddly guitar work, but was a performance that was a celebration of their success, a platform to address moral and personal issues, and also a dream of the band’s since their initial inception. It had been a long time coming.

Performing without any support, this night was for Architects. The band have been around since 2004, and have consistently impressed with each record that they have produced. They are a band that have never been afraid to evolve their sound, and progress further forward, and do so in a way that is authentic and genuine. They have worked hard to get to where they are now, and they have had to wade through immense tribulation to get there. The band’s success has been growing with each release, and their most recent record, ‘For Those That Wish To Exist’, which came out in February of this year, was an incredible win for them, even reaching number one in the UK Albums chart.

Their meteoric rise in the metal ranks has been long awaited, their loyal fanbase have been wanting to see the band play at a venue such as this for over a decade. The show tonight was a testament to the work they have put in, and was a visibly emotional spectacle to behold. The live mixing in the venue was crisp, clean, and balanced, with no member seeming left or drowned out, which is a feat for a band that has so much noise being thrown around. The performance itself was energetic too, with frontman Sam Carter commanding the stage and the audience alike, with a presence that was authoritative but also raw, there is never any showboatery within Architects, and they obviously valued the position they were in.

The show itself was mainly bolstered by tracks off of their most recent record, more stadium-metal type tracks than their prior work, songs that lean heavily into chorus singalongs and powerful wall of sound moments. The tracks definitely delivered the intended experience, with the band sounding almost ethereally large, and performing at a level that not many can reach. Particular highlights of the night included renditions of tracks such as ‘Dead Butterflies’, ‘Black Lungs’, and ‘Meteor’, as well as older tracks such as ‘Doomsday’, ‘Gravedigger’ and 'A Match Made In Heaven’, all of which went down a storm, with every member of the sold out crowd getting involved, whether it be in the pits located within the stands, or singing along and shining phone torches in the seated areas.

The band have such an extensive discography that it must have been hard to fit in all tracks that people would want to see, but the setlist made sense, and was well chosen to closer convey what the band’s current sound is, rather than that of the past; it is good to see artists championing newer tracks instead of rehashing older ones, it showcased the band’s belief in the songs and was a treat to witness. After an emotionally and instrumentally heavy rendition of the track ‘Gone With The Wind’ (a track inspired by late guitarist Tom Searle, who tragically died of cancer), Carter addressed the audience, explaining that performing the venue had been a dream of theirs, and one that could only have been made better by Tom being there. The crowd erupted in chants of his name, applauding the band and his work, in one of the more sombre moments of the night. The way in which Architects have been able to connect with their audience is one of their biggest draws – they approach people as people, and there is an overwhelming sense of friendship when they perform.

This was exacerbated by Carter speaking about his mental health struggles over the pandemic, commending his bandmates and fiancee for sticking with him through dark times. He urged the crowd to look after their friends, and ask if they are okay. He also mentioned the recent spiking issues that have been found across the UK. Always a feminist advocate, Carter has been known to call out groping and improper treatment of women at his shows, and further hammered home the point by stating that it is on men to call out the dodgy behaviour of their friends to attempt to mitigate the issues than can be found within live music events, and indeed everyday life.

Architects absolutely smashed their performance, sonically, emotionally, and physically, and it was a truly unforgettable show that felt very important to both the band members and the audience. The group loved being there, the crowd loved to see them on such a renowned stage, and the energy and atmosphere within the Dome was positive and palpable. There is seemingly nothing stopping the group, and there will surely be much more success to come, deservedly so. 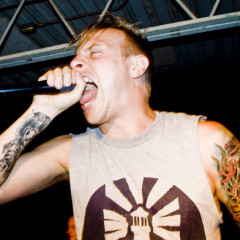 Review: Architects at the Brighton Dome

Metalcore veterans and Brighton locals Architects performed an incredible set at one of the city's most renowned venues.