Voice MagReviewsReview: Where Are Yo…

What do you mean by Where Are You From? Sophie Gresswell's New Creative short film challenges this age-old question and shows just how tiresome it is for those with mixed heritage.

Where Are You From can be viewed here.

Sallow. Sophie Gresswell is surprised when she encounters this word in a description of her grandfather. She dissects every possible meaning of the word, and how peculiar it is to imagine it being applied to the man she knows. Sallow means sickly yellow, but her grandfather is never in poor health. "Born on the island and brought up British." Gresswell briefly runs through his life story, before transitioning to talk about her mother. She recalls a story of her being offered a tray of chocolate fingers, to which she responded, "no thanks, I've already got ten."

Equating her mother's complexion to chocolate sits better with Gresswell. She thinks about how the cocoa bean gets taken from its roots and molded into something different. "The story [of the cocoa bean] is not a million miles away."

Metaphors like this run through the course of Gresswell's five minute short film, each one sounding genuine as she lends her own voice to the backing narration that overlays the unique and evocative visuals, which have been effectively directed by Lawrence Essex.

Metaphors are risky. An overreliance on them can do more harm than good, taking away from the thing itself. If a writer makes a decision to use them, they must be deployed with expert precision and meaning. There are several extended metaphors in Gresswell's audio-visual narrative, each of them used with clear purpose and generating artistically navigated implications.

Using the cocoa bean imagery as an example, Gresswell's metaphors work for a few reasons. One, each of them stems from preconceived imagery surrounding Where Are You From's core concerns — identity and skin tone. The word 'chocolate' being used to describe someone with darker skin is a common but unpleasant way to refer to a person, often being a statement of fetishization or racial provocation.

Two, by incorporating that imagery into her narrative, Gresswell is able to interrogate it and, crucially, repurpose the statement. She harnesses the image of the cocoa bean to describe the story of migration: "plucked from its roots [...] shaped into something new", an evocation of the sense of loss and changed identity that can come from migrant life. She goes on to reason that the term chocolate is not completely inappropriate: "sweet, smooth, and deliciously bitter. It's not a bad description of mum." Here, Gresswell uses chocolate to emphasise her mother's individuality, in direct opposition to its more common use as a generalising statement on people's skin colour. The metaphor works because of how ingrained the comparison already is within the audience's consciousness, and Gresswell uses that as a springboard to create a new meaning, one that indirectly questions the old.

This apt usage of extended metaphors comes to a head when she compares her complexion to a biscuit. She describes her colour changing with the seasons, from raw dough in winter to a "healthy, golden shade" in summer. She then describes her own experience of being asked that infamous question "where are you from? No, no. Where are you REALLY from?"

This moment of frustration pairs particularly well with the on-screen visuals. Painted in impressionist style with a mix of colours, two portraits of the questioner and the questioned engage in the exhausting back and forth. This visual style is excellent. Real world images flash throughout the short film, stylized in ways reminiscent of punk. This is perhaps a reference to people with mixed heritage and their resistance to 'fitting in' to preconceived social narratives, and the ignorant desire to put people into boxes, which is often the underlying intention behind the question "where are you from?"

Gresswell describes the impact of being asked the question "where are you from?", saying her biscuit self feels as if she is being dunked in tea. Tea and biscuits are, of course, fundamentally British, which gives the metaphor a nice cohesion with the narrative thus far, but it is her description of crumbling into a soggy beige mess at the bottom of the mug that elevates the imagery. This is her way of telling the audience that being questioned in this way gives her an intense feeling of displacement, of being told that she is as indistinct as a mushy mess of beige biscuit at the bottom of a mug, definable only by colour.

Where Are You From truly excels in its unwavering focus on its core themes. Visuals, acting, narration, all of it is directed towards exploring the titular question. It is multimedia poetry in motion. Her conclusion, that maybe it is just a stupid question, perfectly undercuts the constant deliberation that has occured in the last five minutes. At the end of the day, defining someone by something as arbitrary as skin colour is not a good way to get to know them. Gresswell's narration occasionally faltered in terms of its performative strength – although never in content. This is a short film that everyone can benefit from, whether as an explanation of why the central question can be inappropriate, or simply as a strong piece of poetic media.

Header Image Credit: BBC Arts and Arts Council England - Where Are You From? 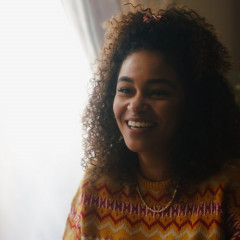 Review: Where Are You From?

What do you mean by Where Are You From? Sophie Gresswell's New Creative short film challenges this age-old question and shows just how tiresome it is for those with mixed heritage.