A specially curated set of performances that shine a light on the lives of opera singers.

From the 29 September to 23 October, the Kings Head Theatre in London is host to a myriad of musical shows under the banner ‘Liminal’. Written and directed by opera singer and drag queen extraordinaire Le Gateau Chocolat, Liminal sees five world-class opera singers perform an ‘operatic mixtape’, each one curated by the performers themselves to tell their own personal stories.

As each version of the production is unique to the performers, I was lucky enough to get a 2-4-1 deal in the form of Honey Rouhani and Robert Barbaro. Both highly successful opera singers in their own right, they also happen to be married, and chose the setlist together to reflect on their journeys as a couple and as new parents. Opening with ‘The Sound of Music’, Honey chose this as a nod to the lullabies that she sings to her newborn son. Other topics that Honey and Robert chose songs for cover body image, heritage and their respective operatic careers. From The Beatles to La Traviata, there’s certainly a song for every audience member and the fact that the performers in Liminal are in control of the setlist brings the show to life.

If you’re looking for plot and dialogue-driven theatre, then Liminal is to be avoided as it revolves entirely around what the music infers between the singers. It helps massively that Honey and Robert are married in real life, as their chemistry is essential in giving the audience a glimpse into their shared personal life (we even get to see footage of their wedding!). Add this to the intimate setting of the small Kings Head Theatre, and it’s impossible not to leave the show feeling as though you know the performers firsthand.

If the other performers are up to Honey and Robert’s standard, then Liminal is to be applauded for its inventiveness and confidentiality. 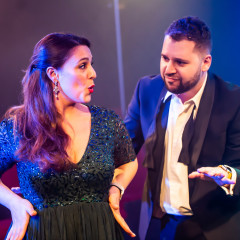 A specially curated set of performances that shine a light on the lives of opera singers.