Voice MagNewsP!NK named the most…

Only two female musicians in the top ten of the century were from the UK.

Philadelphia born artist P!NK has been named as the UK’s most listened to female artist of the 21st century, according to new data provided by a PPL (Phonographic Performance Limited) report based on airplay data, compiled ahead of National Album Day.

P!NK leads a top ten list that is majoritively made up of artists from the US, including musicians such as Madonna and Katy Perry, who also top the list at the second and third position. Lady Gaga came in at number five and Beyonce seven. Adele and Little Mix were the only two British artists to crack the top ten, reaching numbers six and nine respectively. Rihanna (No. 4), Kylie Minogue (No. 8) and Whitney Houston (No. 10) also made the list.

The most-played list is compiled from exclusive music usage and airplay data gained from UK radio stations and television channels. PPL’s library contains the data for over 15 million recordings. It receives the usage data from licensees that describe the music used across billions of seconds of airplay.

P!NK had made a name for herself in the UK even before she had hit the mainstream in her home country. Over her illustrious career, she has garnered 36 Top 40 hits in the UK, including three number one hits: 2001’s Lady Marmalade with Christina Aguilera, Lil’ Kim and Maya, 2002’s Just Like a Pill, and 2008’s So What. She also has ten album titles that have made the top ten in the UK, including 2008’s Funhouse, 2017’s Beautiful Trauma, and 2019’s Hurts 2B Human.

Overall, her studio albums have managed to accumulate a total of 13 Platinum awards in the UK, and at the BRIT awards in 2019 she was given the Outstanding Contribution to Music award.

PPL’s most-played female artists of the UK list is as follows: 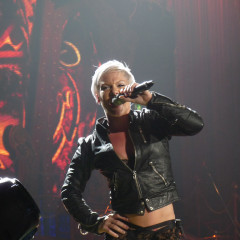 P!NK named the most played female artist in the UK of the 21st century

Only two female musicians in the top ten of the century were from the UK.