Mid-afternoon on Wednesday 13 October, William Shatner will become the oldest person to enter space. The actor, best known for his iconic role as Star Trek's Captain Kirk, turned 90 this year.

He will reach the final frontier alongside three other first-time off-world passengers. The voyage will take place on board the Blue Origin shuttle, developed as part of Jeff Bezos' new enterprise — to create a purchasable experience for cosmically inclined customers. The business magnate took to the stars himself during the first Blue Origin flight that had people on board.

Shatner is keen to check off a trip to space from his to-do list, particularly if it can inspire the next generation of astronautical explorers. The views are set to stun him, according to the actor, and any concerns that he will be unphased after years of playing the most famous interstellar captain are unfounded.

“I’m terrified," Shatner stated, "I’m Captain Kirk and I’m terrified. I’m not really terrified – yes I am... It comes and goes like a summer cold. I’m planning on putting my nose against the window [once I’m in space], and my only hope is I won’t see someone else looking back.”

He will be joined by Vice-President of Blue Origin, Audrey Powers, the co-founder of satellite company Planet, Chris Boshuizen, and Glen de Vries, an executive from the French software and design corporation, Dassault Systèmes.

The trip will provide Bezos with valuable data on the feasibility of consumer-based space travel, and will likely draw in more rich customers with dreams of staring out of a shuttle window and beaming up at the stars.

For his workers back on Earth, many will have to cling on to the hope that their employer will take time out from tinkering around in the stratosphere to improve their reportedly less-than-stellar working conditions. 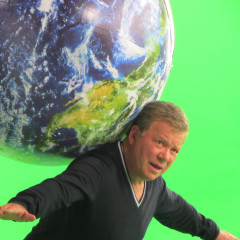