A law firm intends to launch legal action against Amazon to force the corporation to treat its delivery drivers like employees.

Leigh Day, the legal firm that won a landmark workers' rights case against Uber, has set its sights on taking Amazon to task over its classification of delivery drivers as 'self-employed.' Up to £140 million could be owed as compensation, according to the Leigh Day team, with 3,000 workers affected by Amazon's policy.

The issue comes from the nature of the delivery drivers' employment. They are hired through third-party organisations, or "delivery service partners", and are therefore argued by Amazon to be freelance, despite having to base their entire work-day around Amazon deliveries.

Classifying the drivers as 'self-employed' frees Amazon from a whole host of responsibilities towards their workers, such as paying them a minimum wage, offering them holiday pay or bereavement leave, and giving them reasonable grounds for dismissal.

By refusing to consider their delivery drivers employees, Amazon has cleverly avoided having to treat them with the base level of respect workers have had to fight hard for throughout history.

Leigh Day believe each of the 3,000 workers could be owed an average of £10,500 from every year they have worked for the e-commerce titan. Currently, the legal team plans on representing two drivers in a group action lawsuit, but are urging others to come forward and join the proceedings.

“Amazon is short-changing drivers making deliveries on their behalf," argued Leigh Day solicitor Kate Robinson, "This is disgraceful behaviour from a company that makes billions of pounds a year. Drivers delivering for Amazon have to work set shifts and book time off, yet Amazon claim they are self-employed."

In a statement by Amazon, the company claims that they make sure their workers are paid fairly by the third-party organisations that represent them, adding: "We’re hugely proud of the drivers who work with our partners across the country, getting our customers what they want, when they want, wherever they are."

With the sharp rise in online shopping in recent years, the company saw their sales increase by 50% to £20.6 billion during 2020. They paid just under 2.5% of that in UK taxes.

The company is undoubtedly one of the most successful in the world. Robinson argues that giving their drivers employee rights would have minimal impact on their profits, but for the workers, "earning at least national minimum wage, getting holiday pay and being under a proper employment contract could be life changing.” 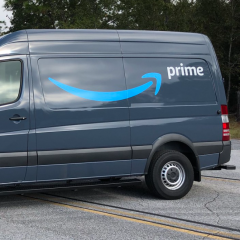 A law firm intends to launch legal action against Amazon to force the corporation to treat its delivery drivers like employees.