Soaring through the air above his fellow fighters, Sora bursts through a keyhole in his reveal trailer and lands with the caption “Sora is finally here!” This marks an end to this final run of DLC for Super Smash Bros. Ultimate.

The platform fighter has sold over 23.84 million units since its release in December 2018, making it the best-selling fighting game of all time. It pits Nintendo all-stars, including Mario, Pikachu, and Zelda, against other third-party characters like Ryu, Sonic, and Snake. With the addition of Sora, Super Smash Bros. Ultimate now boasts a roster of 89 playable characters.

The final direct for the game took place yesterday afternoon, with Sakurai giving a fond farewell to his most popular creation three years after its release. Fans had been going feral with their expectations for the final addition to their beloved game. The previous installment, Super Smash Bros. for Nintendo 3DS and Wii U (often referred to as Smash 4 for the sake of brevity), raised the stakes with its reveal of Bayonetta as its final playable character. Nintendo had a lot to live up to, and the general consensus is, they smashed it.

Between the two runs of DLC for Smash Ultimate, characters from hit games like Banjo & Kazooie, Minecraft, and Tekken have joined the battle. Predictions for the last entry ran all the way from Crash Bandicoot to the guy from Fortnite. Although Sora has long been talked about as a perfect fit for the cast, the sheer legal legwork that would need to be navigated led many to doubt he would ever be included.

Kingdom Hearts is a crossover game in itself. It depicts a world filled with characters from the Final Fantasy franchise alongside Disney and Pixar icons like Mickey Mouse and Buzz Lightyear. To receive the go-ahead to include a character from the franchise, Sakurai would have had to have grappled with every copyright holder for Kingdom Hearts. Speaking about the process, Sakurai explained: “Having Sora join was a huge undertaking, but one that everyone involved was excited to take on. It’s fair to say that his addition required more coordination than other fighters.”

Watching the direct, it appears as if Sora will have exceptional aerial mobility (paving the way for risk-free off-stage shenanigans) and generous hitboxes, but his light weight and floatiness may decrease his viability. He is set to release on 18 October, which will also see the final balance patch for the game. 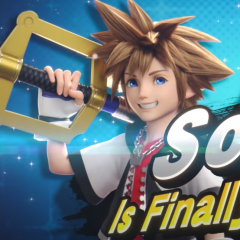