Voice MagNewsBAME history to be t…

Wales is set to become the first country in the UK to make BAME history and experiences a compulsory aspect of the curriculum.

Black, Asian, and minority ethnic (BAME) histories and experiences are set to be part of the Welsh school curriculum as of September 2022. Wales is the first UK nation to make plans for mandatory inclusion of BAME issues in the education system.

The Welsh government has introduced its new Curriculum for Wales guidance, which now includes learning about the diversity of communities, in particular Black, Asian, and minority ethnic communities. The plans were announced as part of Black History Month and are set to take effect in September 2022 with final sign off from the Senedd next month.

The plans follow years of work from education professionals and teachers. Last year a working group was formed to improve teaching regarding Black, Asian, and minority ethnic issues and communities. The group is led by Professor Charlotte Williams and is supported by funding from the Welsh government.

Prof Williams has said of the working group’s aims: “This isn’t about adding an element of Black and minority ethnic history here and there in the new curriculum, but about reimagining learning and teaching across all the elements of the curriculum so that it reflects a Wales that is, and always has been, ethnically diverse, internationalist in its outlook and progressive in its aspirations.”

Welsh education minister Jeremy Miles has said of the plans for the new curriculum, “It is vitally important that our education system equips our young people to understand and respect their own and each other’s histories, cultures and traditions.

“If we are to progress as a society, we must create an education system which broadens our understanding and knowledge of the many cultures which have built Wales’s, and the world’s, past and present.”

Other events taking place in Wales as part of Black History Month include a statue of Wales’s first Black headteacher Betty Campbell being unveiled in Cardiff, the first named outdoor statue of a Welsh woman in the country. St Fagans National History Museum is also hosting an exhibition celebrating Wales’s Windrush generation. The exhibition ‘Windrush Cymru – Our Voices, Our Stories, Our History’ will run at St Fagans through October and then travel to other museum locations throughout Wales. 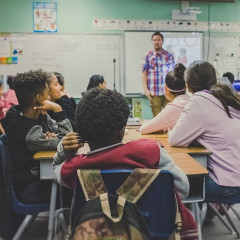 BAME history to be taught in Welsh schools from 2022

Wales is set to become the first country in the UK to make BAME history and experiences a compulsory aspect of the curriculum.