The involvement of police in femicide crimes has come into focus again following the sentencing of officer Wayne Couzens for the murder of Sarah Everard.

Women have been killed by at least 15 police officers, former or still serving, in the UK since 2009 according to the Femicide Census. The involvement of the police in such crimes is being given renewed attention following the murder of Sarah Everard by police officer Wayne Couzens, who receives his sentencing today.

The data from the Femicide Census, first reported on by The Times, shows that the majority of women killed by former police officers were their intimate partners. The census reports that since 2009 there have been 10 murders by former or serving police officers, with other killings being classed as manslaughter.

Police officers’ involvement in femicide cases has been given renewed focus following the arrest of Wayne Couzens, a Metropolitan police officer who kidnapped, raped, and murdered Sarah Everard, a 33-year-old marketing executive who was reported as missing near Clapham Common on 3 March 2021. A vigil was held at Clapham Common following her death, and mourners there were treated poorly by police officers, arresting women and using excessive force to disperse crowds.

After Couzens’ admission of guilt, Met Commissioner Cressida Dick said: “I have 44,000 people working in the Met. Sadly, some of them are abused at home, for example, and sadly, on occasion, I have a bad ’un.” Co-founder of the Femicide Census, Karen Ingala-Smith criticised this view, saying: “This is not the problem of a few ‘bad ’uns’ but systemic and institutional sexism. The Femicide Census has shown that even murder of a woman was not a one-off.”

Ingala-Smith also noted that the problem went “way deeper” than any one-off incident, citing the scandal that involved undercover officers taking sexual advantage of activists that they were targeting in their work. The theme of taking advantage may be key to much of the police’s involvement in femicides, as it has been revealed in Couzens’ trial that he was witnessed by passers-by handcuffing Sarah Everard as he pretended to arrest her for breaching Covid restrictions.

A former long-term boyfriend described Everard as "extremely intelligent, savvy and streetwise" and "not a gullible person", with prosecutor Tom Little QC saying that he could not imagine that Everard would get into a car with an unknown person "unless by force or manipulation". A couple travelling past in a car witnessed but did not intervene, saying in court that they "assumed Ms Everard must have done something wrong", potentially an assumption Couzens knew he could rely upon from both Everard and the public. 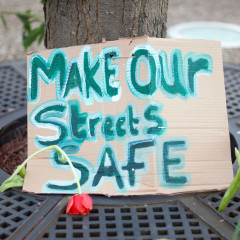 The involvement of police in femicide crimes has come into focus again following the sentencing of officer Wayne Couzens for the murder of Sarah Everard.