The case concerns the use of reversible hormone treatments, and is a win for the rights of transgender young people.

Under-16s can now access puberty blockers as long as their doctor has judged that they are fit to consent, after the Court of Appeal overturned a 2020 ruling that limited this. The appeal was brought to court by the Tavistock Trust, which runs the only youth gender identity clinic in the UK currently.

Puberty blockers are a reversible treatment that allow transgender youths to delay the onset of puberty whilst they navigate transitioning and their gender identity. The drugs work by suppressing the release of hormones, an effect that ceases if the treatment is discontinued. The treatment is prescribed to young people experiencing gender dysphoria, a term that the NHS defines as “a sense of unease that a person may have because of a mismatch between their biological sex and their gender identity”.

The 2020 ruling that caused limited access to this treatment claimed that under-16s lacked the capacity to consent to it. The original case was brought by Keira Bell, a woman who had detransitioned and said that she wished that the clinic had challenged her more on her original conviction to transition. Bell began to take puberty blockers when she was 16 after being referred to Tavistock’s Gender Identity Development Service (GIDS), after which she eventually began using prescribed testosterone, and then had top surgery (a double mastectomy with nipple grafts).

Bell, now in her 20s, says she regrets her decision to transition and is disappointed that the court has overturned the original ruling. However, the ruling only applies to the reversible treatment of puberty blockers, and does not improve accessibility to further transitionary procedures such as the prescription of testosterone or oestrogen and gender affirming surgeries. The prescription of puberty blockers is still a complicated process for under-16s, needing parental consent as well as the doctor’s referral, and this is after a long time on a waiting list.

Many transgender teenagers say this wait time is also a detriment to their mental health, with the eventual access to puberty blockers being a lifeline that helps them cope with severe cases of gender dysphoria whilst they navigate their gender identity. GIDS themselves say that hormone treatment "allows a young person time to consider their options and to continue to explore their developing gender identity before making decisions about irreversible forms of treatment".

People who detransition, such as Keira Bell, are also in a minority. The UK’s LGBT rights charity Stonewall quotes a study that shows that “of the 3,398 trans patients who had appointments at an NHS Gender Identity Service between 2016 and 2017, less than one per cent said in those appointments that they had experienced transitioned-related regret, or had detransitioned”.

A spokesperson for Tavistock has also commented on the sense of allowing doctors, rather than courts, to give medical advice to those transitioning, stating: "the judgement upholds established legal principles which respect the ability of our clinicians to engage actively and thoughtfully with our patients in decisions about their care and futures… It affirms that it is for doctors, not judges, to decide on the capacity of under-16s to consent to medical treatment."

The Court of Appeal has reiterated this sentiment, acknowledging the "difficulties and complexities" of the case, but stating that "it is for the clinicians to exercise their judgement knowing how important it is that consent is properly obtained according to the particular individual circumstances". 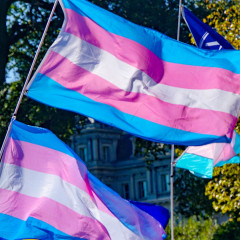 The case concerns the use of reversible hormone treatments, and is a win for the rights of transgender young people.