The famous painter had sketched an old man at the start of his artistic career, but it was lost until recently.

A newly discovered Vincent Van Gogh sketch of an old man holding his head in his hands is now being exhibited, after being held on to by private collectors for over a century. It went on display for the first time at an Amsterdam museum on Thursday. The drawing is titled Worn Out, and depicts a man who looks troubled, sitting on a chair, head in hands. The sketch was reportedly created in 1882, at the very beginning of Van Gogh’s career, before famous paintings such as Sunflowers.

The original owners of the art were Dutch, having bought the piece in 1910. They asked the Van Gogh Museum for authentication of the work, before the confirmation that it was indeed a “new work” from the artist. Subsequently, the piece will be temporarily exhibited at the museum until 2 January, before being handed back to its original owners. A senior researcher at the Van Gogh Museum said: "This one has never been seen before anywhere. It's the first time that this drawing is out in the open. It comes from a Dutch private collection where it has been for a very long time. And this is the first time and occasion that the world is able to see it."

Emilie Gordenker, director of the Van Gogh Museum mentioned: "It’s quite rare for a new work to be attributed to Van Gogh, we’re proud to be able to share this early drawing and its story with our visitors." The museum does already own a Van Gogh painting of the same name, which the artists apparently preferred to the newly found version. The work is said to have been one of hundreds of sketches that the artist had made whilst living in The Hague and learning the trade of artists. Van Gogh had sent a letter to his beloved brother Theo, stating that multiple versions of Worn Out were made, however, this is the first time that one has been found.

The original owners of the piece have asked not to be named, and submitted the work for authentication after the museum expressed that they wanted to collate a digital database of Van Gogh’s work. The authentication of the drawing was easily done, as it had been bought from a well-known collector of Van Gogh, Henk Bremmer, reportedly for only £6.  Even the identity of the man in the drawing is known, the pensioner with a distinctive bald head and white sideburns was named as Jacobus Zuyderland, who was 72 at the time of the sketch.

Header Image Credit: "Worn Out" by lluisribesmateu1969 is licensed under CC BY-NC 2.0 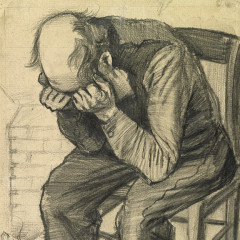 The famous painter had sketched an old man at the start of his artistic career, but it was lost until recently.