The protesters, from the group Insulate Britain, are calling for increased home insulation.

Insulate Britain is a group that aims to pressure the government into committing to a complete overhaul of home insulation by 2030. They say that their demands were hand delivered on 21 August 2021 to 10 Downing Street, but have not yet received a response. A statement from the group concerning the events on Monday says, “Insulate Britain says today’s disruption is just the start. Actions will continue until the government makes a meaningful commitment to insulate Britain’s 29m leaky homes, some of the oldest and most energy-inefficient in Europe.”

The events on Monday saw several members of the group being arrested, with Surrey police saying 36 individuals were arrested at junctions 6 and 14, Kent police arresting 12 people at junction 3, Essex police also arresting another 12 at junction 31, and Hertfordshire police arresting 18 near junction 20. The protest also sparked violence from motorists, with footage from junction 20 showing a protester being dragged from the road by an irate driver.

The protest has had a mixed reaction, even from the drivers affected. One of the drivers, named Laura, tweeted: “I have been affected by your protests this morning, that I don’t mind. However, have you thought about the pollution you are causing to the environment with the tailbacks of 15/20 miles on several sections of the m25?  It makes it all a joke!”

Green Party member Matt Hill, who was also affected by the protests, tweeted in support however, saying that he was “Frustrated & concerned for my son being late 4 college but no where near concerned as I am for his future if we don't act urgently to address our #ClimateEmergency”.

AA President Edmund King said “This action is not only incredibly dangerous in potentially putting lives at risk but it also backfires in environmental terms by causing more delays and more vehicle emissions.”

Beyond Monday’s protests, Liam Norton, 36, a supporter from London, has raised the issue of the benefits of the group’s aims, saying: “It's a no-brainer. Insulating Britain will reduce emissions, provide hundreds of thousands of jobs and stop our elderly dying in cold homes each winter".

In reply to the group’s demands a government spokesperson has said: "We are investing £1.3bn this year alone to support people to install energy efficiency measures, and our upcoming Heat and Buildings Strategy will set out how we decarbonise the nation's homes in a way that is fair, practical and affordable." 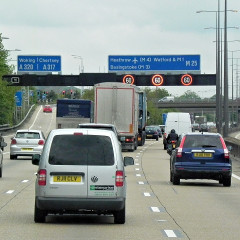 The protesters, from the group Insulate Britain, are calling for increased home insulation.