Voice MagNewsWinners of the Ig No…

The award was presented in ten different categories, including an award for transportation given to a group of researchers analysing the impact of transporting rhinoceroses upside-down.

The awards cover a range of categories each year, largely based on the perhaps equally well-respected but certainly more well-known Nobel Prize. Significant recipients include President Alexander Lukashenko, who won the Ig Nobel Peace Prize for making public applause illegal, which resulted in the arrest of a one-armed man.

Whilst its name may suggest otherwise, this award ceremony is conducted on friendly terms with the Nobel Prize; many former Nobel Prize winners are called upon to physically present the awards, although this year that was more of an honorary privilege given the online nature of the ceremony.

So what is the significance of upside-down rhinos? Inverted importation has long been the standard form of transport when it comes to moving these hefty ungulates from place to place, but there had yet to be a study on whether this process was actually safe. A group of wildlife veterinarians from Cornell University took it upon themselves to investigate this. Given that rhinos are critically endangered, and that poaching efforts and habitat destruction often result in the need to transport members of the species to medical facilities, this research was by no means pointless.

The findings, happily enough, indicate that transporting rhinoceroses upside down is largely harmless, and possibly more benevolent than moving them chest-down or on their sides. The method relieves weight-related stress on their muscles, particularly on their sternums, and has a positive effect on blood flow to their lungs.

As per tradition, the ceremony ended with the commiseration: "If you didn't win a prize — and especially if you did — better luck next year!"

And who said scientists have no sense of humour?

Header Image Credit: "Rhino in the water with open mouth" by Tambako the Jaguar is licensed under CC BY-ND 2.0 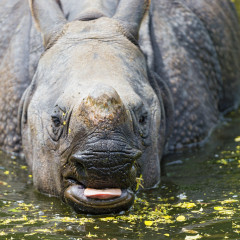 The award was presented in ten different categories, including an award for transportation given to a group of researchers analysing the impact of transporting rhinoceroses upside-down.