The publication has removed statements from the feminist philosopher criticising TERFs alignment with far right ideologies.

The Guardian has come under fire after removing a passage from their interview with feminist philosopher and author of the thoroughly influential Gender Trouble, Judith Butler – after it was published. In the paragraph, Butler compared trans-exclusionary radical feminists (TERFs) to fascists, stating that it is “appalling and sometimes quite frightening” to see that people labelling themselves as feminists are happy to align themselves with far right and religious extremist individuals in their campaign against trans rights.

Butler stated, in the redacted section:

“The Terfs (trans exclusionary radical feminists) and the so-called gender critical writers have also rejected the important work in feminist philosophy of science showing how culture and nature interact (such as Karen Barad, Donna Haraway, EM Hammonds or Anne Fausto-Sterling) in favor of a regressive and spurious form of biological essentialism. So they will not be part of the coalition that seeks to fight the anti-gender movement. The anti-gender ideology is one of the dominant strains of fascism in our times. So the Terfs will not be part of the contemporary struggle against fascism, one that requires a coalition guided by struggles against racism, nationalism, xenophobia and carceral violence, one that is mindful of the high rates of femicide throughout the world, which include high rates of attacks on trans and genderqueer people.”

The rest of Butler’s censored response can be found here.

The interview was conducted by Jules Joanne Gleeson, who has also been blindsided by the Guardian’s editing of her and Butler’s statements. Gleeson has stated that within hours of the article being posted, she was emailed with a note from the Guardian’s Reader Complaints department stating that the complaints had already been escalated to senior editorial staff and there had been a “long discussion” which she had not been invited to participate in.

Gleeson has stated that the complaints and subsequent editing were concerned with her referencing the Wi Spa incident, in which a video went viral of a woman complaining that she saw someone with a penis in a women-only area of a spa in Los Angeles. The person exposing themselves was recently revealed to be an individual named Darren Merager, who has been a registered sex offender since 2006 and is being charged for indecent exposure for the recent incident at Wi Spa. The video sparked yet another fierce debate on trans rights and a series of “chaotic rallies” in LA (whether or not Merager is trans or not is still unconfirmed) in which trans rights protesters fought against anti-trans protesters.

Gleeson argued that her point in raising this incident still stands, as the protests saw women carrying ‘protect female spaces’ signs marching with the decidedly far right affiliated Proud Boys, something that the Guardian themselves reported on. However, she admits “I can see why the new developments took Wi Spa from a weak example to a counter-productive one” and offered to revise her question to Butler “free of charge” so that Butler’s response could remain published.

Gleeson says, “I explained that while I wasn’t attached to my question, and was happy for that to get revised or removed, I could not endorse removing Judith Butler’s answer… Unfortunately, the Guardian editors decided to go ahead with their decision to censor Judith Butler.”

This removal of Butler’s statements has a particular sting for some given the Guardian’s regular criticisms of Butler and their alleged willingness to platform TERFs and other individuals who hold anti-trans sentiments. In a Guardian article last month, Rachel Cooke made a seemingly snide comment about Butler, stating that current academics are “drinking the Kool-Aid that is Judith Butler, high priestess of gender theory”.

Author and journalist Thomas Page McBee has commented on the Guardian’s relationship with TERFs in an Instagram post, stating, “TERFs have gained a shocking amount of mainstream acceptance in the UK, and the Guardian has platformed these transphobic voices for years, making Butler’s statement all the more powerful in this particular outlet.”

Butler has not yet publicly commented on these events. However, Gleeson has made an interesting point in her statement to VICE: “I’m loath to make an appeal to our identities at this point, but it seems a fine state of affairs when an intersex woman interviewing one of the few non-binary philosophy professors in the world is decried online as ‘misogyny’… One last question for the editorial teams at The Guardian: why should 'Gender Critics' be beyond criticism?” 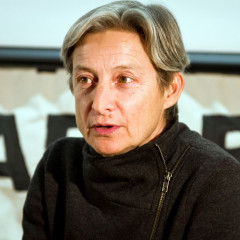 The publication has removed statements from the feminist philosopher criticising TERFs alignment with far right ideologies.