16 years after publishing her first novel, the highly acclaimed Jonathan Strange & Mr Norrel, Clarke returned to the literary scene with her second book, Piranesi. It was quite the comeback, with numerous accolades and critical acclaim preceding its highest endorsement — the 2021 Women’s Prize for Fiction.

The annual award is dedicated towards recognising talented female writers from around the world, and is one of the UK’s most prestigious literary prizes. 2021’s panel of judges was chaired by author Bernardine Evaristo, winner of the 2019 Booker Prize. This year saw the first inclusion of a trans woman in the longlist, Torrey Peters, for her novel, Detransition, Baby.

With five other authors in the shortlist, Clarke was the favourite to win the £30 000 cash prize before the event, living up to the bookies’ endorsement when her novel was declared the winner on 8 September.

The novel in question, entitled Piranesi, takes place in a labyrinthine building (referred to only as ‘the House’) occupied by the titular character and one other entity known as ‘the other.’ It is a vast location with a warped sense of reality. Clouds drift through the top floors and an ocean courses through the lower levels; birds and fish reside in each respectively. The two residents seek some unknown “great knowledge”, and much of the narrative is told through the journals kept by Piranesi. Mystery and intrigue build up as he begins to unravel

Bernardine lauded the novel as “a truly original, unexpected flight of fancy which melds genres and challenges preconceptions about what books should be”. Her fellow judge, Sarah-Jane Mee, conveyed the significance of Piranesi’s win, saying it “pretty much sums up what the Women’s fiction prize is all about […] women can write about whatever they want. So much of the time, when you talk about women’s fiction, female authors will tell you that they’re told to write about their experiences, that women’s stories need to be heard. And that’s all very important, but it sort of constrains women”.

Clarke talked about the importance of the award to her during her acceptance speech, stating that due to her difficulties writing the book alongside her chronic fatigue syndrome: “I’m doubly honoured to be here. And my hope is that my standing here tonight will encourage other women who are incapacitated by long illness.” 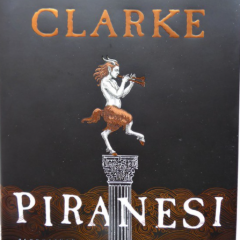 Susanna Clarke named winner of the 2021 Women's Prize for Fiction