Live music and festivals have seen a return over the past couple of months, with many venues finally able to put on events. Yet there is an air of uncertainty within the industry regarding the government’s past plans for covid passports, with a lack of clarification on rules. This is alongside concerns that the recently implemented events insurance scheme is unfit for purpose.

Back in July, Boris Johnson stated that only double vaccinated individuals will be allowed access to live music events in an effort to drive vaccination in younger people. However, those that work within the industry are yet to receive any confirmation of Covid guidelines. Health secretary Sajid Javid has announced that “no final policy decision has yet been taken” in regards to the music sector.

Chair of the digital, culture, media and sport select committee, Julian Knight, has said that he isn’t aware of any backtracking on the vaccine plan mentioned in early summer, telling venues that: “I think in these circumstances, it’s best for venues to prepare for their introduction as the costs of not doing so could be terminal.”

Currently, events and venues have been asking patrons to confirm vaccination or a negative test on entry to their premises, with many believing that this approach has been so far successful. However, there was the recent super-spreader event that was Cornwall’s Boardmasters festival last month, leading to 5000 new cases, which could call the strategy into question.

Steve Sayer, vice-president and general manager of London’s O2 Arena, thinks that the government will not go ahead with their vaccination or no entry policy, as, “it goes against everything the government have talked about in terms of ensuring that any mitigations are fairly applied and don’t discriminate against one group or another''. Michael Kill, chief executive of the Night Time Industries Association, has mentioned that stricter entry rules will lead to less spontaneous customers, and will disadvantage venues competitively when compared to pubs or bars.

In the UK, nearly 77% of the adult population are now vaccinated. In a recent survey by Music Venue Trust it is highlighted that 91.6% of live music fans will be vaccinated by the end of September.

Compounding the confusion around covid passports, is the insurance scheme that the government had announced in August, with some believing that the scheme is inadequate. The insurance plan will cover costs incurred by venues if events cannot go ahead, like in the lockdowns. However, the scheme will not cover any lost money incurred when an artist or crew member contracts Covid and therefore cannot perform, and will also not subsidise the lost income caused by a local council’s social distancing rules.

Knight concludes that the government should have instated the plan “several months ago”, so that events such as Boomtown and Kendal Calling could go ahead – both cited that lack of insurance caused their cancellations. He said: “My view is that the events insurance scheme is about as good as could be expected under the circumstances and is more extensive than many other international schemes”. More details are due to be published this month, however, it is now two weeks into September, and venues are still frustrated by the lack of clarification regarding which businesses will be affected.

Header Image Credit: "Open passport with many stamps. Travel concept during quarantine" by wuestenigel is licensed under CC BY 2.0 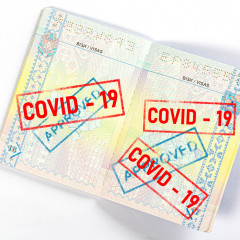