Band criticises both musicians and ministers for not doing enough to combat live music’s carbon footprint.

According to the band Massive Attack, there is an urgent need for a plan to be implemented to help the music industry meet climate change targets.

The news follows the publication of a report the band recently commissioned to examine the carbon footprint of the music industry. The report, written by University of Manchester, highlights that musicians should take more responsibility by not using private jets and by reducing the amount of equipment brought with them whilst touring. They should instead use what is offered by the venues themselves and look at greener alternatives.

Robert Del Naja of Massive Attack fame has also criticised the government for not doing enough to support the industry to cut emissions.

“The live music industry, especially after Brexit, is so important to national identity and self-esteem.” Del Naja stated, “It’s one of the few areas you could describe as genuinely world-class and has a vast social and economic value, as well-reported, generating over £4.6bn for the economy every year and employing thousands of dedicated people.”

“But where is the government planning to support the rate of adaption we’re going to need to hit compatibility with [the Paris agreement]? It doesn’t seem to exist. The data is not surprising, it’s the strategy that’s missing here.”

The band has been carbon offsetting for a while now, always looking for ways to cut their emissions. They try to take the train wherever possible, build sets that are easier to transport, use local providers, and also advocate for green energy. Del Naja said: “When we turn up at festivals, we use the same gear. We get on the same stage. Most of the stuff we use is pretty similar. It sounds crazy that bands are crisscrossing the same highways at night with the same gear with the same big lorries - it's unnecessary."

Prof Carly McLauchlan led the research and helped to model ways that the music industry could meet its targets. She explained that the report was to help highlight the urgency of the work that the industry needs to do:

“We’ve been met with a lot of enthusiasm in the sector and lots of [artists] are already doing lots of it. When people make a lot of those adaptations it starts to become normal practice, for example, to think about routing a tour from a carbon point of view.” She added: “Basically, as is the case with much climate action, we actually know what we need to do, we just need to get on with doing it.”

Header Image Credit: "Robert Del Naja of Massive Attack" by vonlohmann is licensed under CC BY 2.0 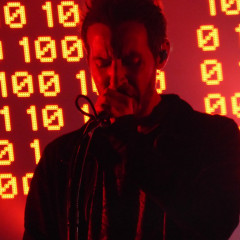 Band criticises both musicians and ministers for not doing enough to combat live music’s carbon footprint.