A think tank has argued the case for swapping out high-in-emissions meat products for “alternative proteins”.

Think tank Social Market Foundation (SMF) has called for the UK government to promote the sale and development of meat alternatives and move away from excessive consumption of animal products as part of its fight against the ongoing climate crisis.

The production of animal products has a significant impact on our carbon emissions. Currently, animal agriculture accounts for 14.5% of global greenhouse gas emissions, according to the UN’s Food and Agricultural Organization (FAO). The official Committee on Climate Change states that the amount of meat the UK consumes needs to be reduced by more than a third by 2050. The UK’s meat consumption has decreased in recent years – but not at a quick enough pace. The amount of meat per capita consumed within the UK is only 6% less than in 1974.

The increased focus on artificial meat could be a welcome alternative to the climate tax proposed by a coalition of the UK’s health professionals last year. The tax would see food with a heavy environmental impact becoming more expensive by or as of 2050. SMF’s report states that this tax would be “radical and politically sensitive”, noting that instead, “the rapid expansion of the alternative protein market offers a way to reduce meat consumption through consumer choice”.

Other benefits of reducing our meat consumption and supporting “alternative proteins”, according to the SMF, include the reduced risk of zoonotic diseases (such as SARS-CoV-2), improved animal wellbeing, and the chance to build and support a new sustainable industry within the UK for both new and existing businesses, with the opportunity to export.

The paper’s author, SMF research associate Linus Pardoe, says that to “help consumers transition to more sustainable dietary habits” the UK must start “expanding the range of alternative protein products on the market. We can only expect consumers to switch from eating meat if product offerings are high-quality, affordable and easily accessible” also noting that “the global race for alternative proteins is on and the UK should be leading the charge.” 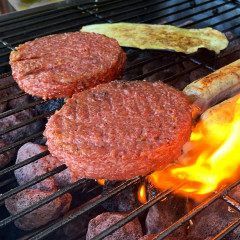 A think tank has argued the case for swapping out high-in-emissions meat products for “alternative proteins”.